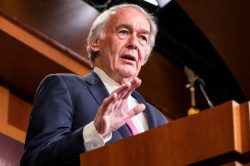 In letters signed by Sens. Edward Markey and Jeffrey Merkley, as well as House Reps. Pramila Jayapal and Ayanna Presley, they warned that “facial recognition tools pose a serious threat to the public’s civil liberties and privacy rights, and Clearview AI’s product is particularly dangerous.” The company has a database of more than 10 billion faces, largely built on scrapes of social media websites like Facebook and Instagram, against which police can check their own facial imagery to identify people.

“Additionally, this technology poses unique threats to Black communities, other communities of color and immigrant communities,” the officials wrote, talking about general facial recognition tech. They cited a government study that found Black, Brown and Asian individuals were up to 100 times more likely to be misidentified than white male faces. There have been a handful of cases where Black citizens were wrongfully arrested because of a false facial recognition match.

“Facial recognition technology like Clearview’s poses unique threats to marginalized communities in ways that extend beyond the tools’ inaccuracy issues. Communities of color are systematically subjected to over-policing, and the proliferation of biometric surveillance tools is, therefore, likely to disproportionately infringe upon the privacy of individuals in Black, Brown and immigrant communities,” the letters continued.

“We urge you to stop use of facial recognition tools, including Clearview AI’s products.”

The lawmakers last year put forward a bill, the Facial Recognition and Biometric Technology Moratorium Act, which would ban the use of facial recognition by federal agencies or any government official. Sens. Bernie Sanders and Elizabeth Warren also backed the bill.

Hoan Ton-That, founder and CEO of Clearview AI, said in a statement: “I have the utmost respect for Senators Markey and Merkley, and Reps. Jayapal and Pressley. However, on the topic of Clearview AI, recent NIST testing has shown that Clearview AI’s facial recognition algorithm shows no detectable racial bias, and to this date, we know of no instance where Clearview AI’s technology has resulted in a wrongful arrest.” He cited another government study in which Clearview AI’s algorithm “correctly matched the correct face out of a lineup of 12 million photos at an accuracy rate of 99.85%, which is much more accurate than the human eye.”

“According to the Innocence Project, 70% of wrongful convictions result from eyewitness lineups. Accurate facial recognition technology like Clearview AI is able to help create a world of bias-free policing. As a person of mixed race, this is highly important to me.

“We are proud of our record of achievement in helping over 3,100 law enforcement agencies in the United States solve heinous crimes, such as crimes against children and seniors, financial fraud and human trafficking.”

The company has continued to attract buyers in the federal government despite concerns over the ethics of its use. A recent $50,000 contract asked Clearview to develop glasses with facial recognition for potential future use on Air Force airfields, while ICE has put $1.75 million on the table over two contracts to buy the technology. The FBI recently made an $18,000 order for Clearview licenses.

At least 35 killed in attack on DR Congo gold mine: local sources

No, The Biden Administration Is Not Giving Away Crack Pipes