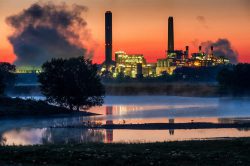 On its final day of a historic term, the U.S. Supreme Court on Thursday placed major restrictions on the ability of the federal government to address climate change.

The 6-3 ruling was narrower in scope than some environmental advocates had feared from the conservative supermajority. But while it won’t have the immediate transformative effects of some of the court’s other major decisions this term, it has the potential to significantly alter federal regulatory power over what is widely viewed as the most urgent environmental issue for the nation – and the world.

In its decision, the high court fleshed out a vague area of law known as the major questions doctrine – essentially that federal agencies can’t take major actions without clear direction in law from Congress – and how it applies to the U.S. Environmental Protection Agency (EPA).

Why We Wrote This
Today the Supreme Court addressed a balance-of-powers question: the role of Congress versus agencies in setting federal regulations. The ruling complicates the already-difficult politics of addressing climate change.

Absent explicit congressional action – for which the Biden administration has been lobbying, so far fruitlessly – federal courts may now be poised to play a major role as referees in future EPA efforts to tackle climate change.

For those wary of the executive branch taking unilateral actions that affect their lives, today’s Supreme Court ruling is a win. But for those who question the ability of Congress to act quickly and effectively in response to the evolving threats of climate change, the ruling is a serious blow.

“Action through the EPA is one of the few remaining [federal] tools to really make progress on emissions reductions,” says Lindsey Walter, deputy director for climate and energy at Third Way, a center-left think tank.

“While this is a disappointing decision, the court has left the door open for the EPA to set strong standards to reduce emissions from power plants,” she adds. “Now the EPA must move quickly to issue a new rule.”

Ruling on a defunct Obama-era planThe case decided on Thursday, West Virginia v. EPA, arose from an unusual posture – meaning there were serious questions about whether the justices should even have heard it.

The fact that the policy is not in effect, and likely will never be in effect, would typically be strong grounds for the Supreme Court to not consider the issue. But the court here decided otherwise. It then moved to the core question of the case: whether, in a section of the Clean Air Act, Congress empowered the EPA to restrict carbon dioxide emissions from power plants.

Congress did no such thing, wrote Chief Justice John Roberts in the majority opinion.

“Capping carbon dioxide emissions at a level that will force a nationwide transition away from the use of coal to generate electricity may be a sensible ‘solution to the crisis of the day,’” he added. But “a decision of such magnitude and consequence rests with Congress itself, or an agency acting pursuant to a clear delegation from that representative body.”

The high court’s ruling is limited to that decision, Chief Justice Roberts stressed – a relatively narrow outcome, according to some experts. Essentially, the EPA cannot use that section of that law (the Clean Air Act) for that purpose (restricting emissions from power plants) in the broad manner outlined in the CPP. That is all.

In her dissent, Justice Elena Kagan painted a more troubling picture of where the ruling now leaves the country.

With its decision, the Supreme Court strips the EPA “of the power Congress gave it to respond to ‘the most pressing environmental challenge of our time,’” she wrote.

And not only that. The court has limited the EPA’s ability to regulate carbon emissions, she added, but “both the nature and the statutory basis of that limit are left a mystery.”

“How far does its opinion constrain EPA? The majority makes no effort to say,” she continued.

What next for U.S. climate policy?What Chief Justice Roberts – and, in a separate concurrence, Justice Neil Gorsuch – wrote is that regulatory authority in an area as politically and economically important as climate change must be determined by Congress, not by the EPA or other executive branch agencies.

“When Congress seems slow to solve problems, it may be only natural that those in the Executive Branch might seek to take matters into their own hands,” wrote Justice Gorsuch in his concurrence. “But the Constitution does not authorize agencies to use pen-and-phone regulations as substitutes for laws passed by the people’s representatives.”

That assertion in particular left many environmental groups frustrated.

There have been numerous proposals for legislative climate action in recent years, from a national price on carbon, to tax incentives for carbon capture technology, to widespread emissions regulations.  But most of these efforts have stalled. The Senate is still negotiating a package that could extend tax incentives for renewable energy sources and subsidize other climate-friendly technologies. But for the most part, advocates say, Congress has fallen well short of any sort of widespread climate action.

“Congress has not passed, and never even seriously considered, a federal renewable energy standard, leaving it up to a patchwork of state standards … to shift the electricity sector from fossil fuels to renewables,” says Basav Sen, director of the climate policy project at the Institute for Policy Studies.

“It continues to overfund highway sprawl and underfund public transportation,” he adds.

That said, from economics to politics, much has changed since 2015 that could make congressional action more likely.

Over the past decade, the price of renewable power has plummeted, undercutting many fossil fuel sources. In 2020, renewables – including wind, hydroelectric, solar, biomass, and geothermal energy – became the second most prominent electric-power source in the United States after natural gas, according to the Energy Information Administration. Coal consumption, meanwhile, has dropped.

There has also been a shift in attitude about climate change in general. Fewer people deny that climate change exists, according to nationwide surveys. And increasingly, the political debate over climate action has to do with the “how” – whether to depend on new technology such as carbon capture, and how fast to phase out fossil fuels.

Furthermore, Thursday’s ruling – on its face, at least – still leaves the EPA and other agencies with regulatory tools to choose from, experts say.

The court did not dispute that greenhouse gases were a pollutant, nor did it say that climate change was an issue that only Congress could address, for example.

In the U.S., the transportation sector is the leading greenhouse gas emitter (accounting for 27% of emissions in 2020,  just ahead of the electricity and industrial sectors). Nothing in the ruling would impact the EPA’s ability to regulate tailpipe emissions – or the U.S. Department of Transportation’s fuel economy standards, which also serve to limit the amount of fossil fuel burned on U.S. roads.

“There are a lot of alternatives that are still on the table,” says Steven Cohen, a professor at Columbia University and former executive director of the school’s Earth Institute.

The decision “is very unfortunate and it’s clearly an expression of extreme right-wing ideology, but I don’t think it prevents all forms of climate policy,” he adds.

A doctrine creates new uncertaintyThe West Virginia v. EPA decision is nevertheless a landmark one in the context of the major questions doctrine.

The doctrine is relatively new  – one of Chief Justice Roberts’ oldest citations on it is from 2000 – and holds that federal agencies should have strict limits on their ability to issue regulations of “major importance” unless Congress clearly delegates that authority to the agency.

Those cases, among others, are examples of “extraordinary cases” about agency regulations of such “economic and political significance” that it “provides a ‘reason to hesitate before concluding that Congress’ meant to confer such authority,” wrote Chief Justice Roberts in his majority opinion.

The Clean Power Plan was another such case, he said, because it had the significant economic effect of shifting how the country’s electrical grid generates power; because Congress had already considered and declined to implement similar policies, like an emissions-trading market; and because the Clean Air Act wasn’t designed to address climate change, among other reasons.

The doctrine works “to protect the Constitution’s separation of powers,” wrote Justice Gorsuch. Without it, agencies could implement regulations as de facto new laws “more or less at a whim.”

“Stability would be lost, with vast numbers of laws changing with every new presidential administration,” he added. “Rather than embody a wide social consensus and input from minority voices, laws would more often bear the support only of the party currently in power.”

But critics say that what the major questions doctrine is really doing, in effect, is assuming that lawmaking power for itself.

“There wasn’t much precedent to follow” on the doctrine, says Hajin Kim, a professor at the University of Chicago Law School.

But now, there doesn’t seem to be much restraining the court from ruling that a regulation it doesn’t like is a “major question” that must be struck down, she adds.

“It just gives them more discretion and power,” she continues. The doctrine “is an enormous power grab by the judiciary under the guise of separation of powers.”

Justice Kagan made a similar argument in her dissent. The court “has never even used the term ‘major questions doctrine’ before,” she wrote. (Justice Gorsuch did use the phrase in a concurrence to the vaccine mandate opinion.)

“Some years ago, I remarked that ‘[w]e’re all textualists now.’ … It seems I was wrong,” she added. “The current Court is textualist only when being so suits it. When that method would frustrate broader goals, special canons like the ‘major questions doctrine’ magically appear.”

“Whatever else this Court may know about, it does not have a clue about how to address climate change,” Justice Kagan wrote. “The Court appoints itself – instead of Congress or the expert agency – the decisionmaker on climate policy. I cannot think of many things more frightening.”

Reducing the power of executive branch agencies has long been a goal of the conservative legal movement. There’s no question that it will now be harder for the EPA to implement emissions regulations. Whether the Supreme Court will choose to use its major questions power in other areas remains to be seen.

“The broader effect is to disempower all agencies, any agency, from acting on an important problem if Congress hasn’t clearly authorized the agency to do that,” says Lisa Heinzerling, a professor at the Georgetown University Law Center and lead author of the winning briefs in Massachusetts v. EPA, the 2009 ruling that said EPA can regulate greenhouse gases.

If you’re an agency crafting a major regulation, and “you think [Justice] Brett Kavanaugh, John Roberts, [or] Neil Gorsuch is going to raise his eyebrows at what you’re doing, you might pull your punches regulation-wise,” she adds.

“If that sounds subjective, it is.”

How Joe Biden has presided over RECORD levels of migration, deaths and rescues at the border

On This Day In Space: May 8, 1962: Centaur rocket explodes during maiden flight

March for Our Lives: gun control protests sweep the nation

How to Access Banned Books If Your Local Library Sucks

Netflix movies, shows, & series: New releases for the week of May 22nd