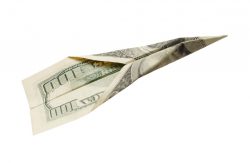 Airfares are soaring, and not just because of jet fuel prices.

With summer airfares already climbing fast, airline executives have not been shy in telling travelers that prices are only going to get steeper as we head into spring and summer.

Last week, Delta CEO Ed Bastian told the Financial Times that higher fuel costs would “no question” lead to fare hikes, and that the airline would add a fuel surcharge to international flights as “market conditions permit.” Meanwhile, at a JPMorgan investor conference, Delta president Glen Hauenstein said passing on higher fuel costs “is something that we can easily achieve and that we will achieve in the second quarter. As fuel prices fluctuate rapidly here, we need to recapture somewhere between $15 and $20 each way on a ticket.” Translation: Expect a $30-$40 hike on a roundtrip ticket this summer.

But don’t buy the line that higher airfares are entirely due to jet fuel prices, say airfare experts.

First, a big portion of the price increases can be chalked up to typical seasonal fluctuations and surging demand. “It’s normal for airfares to rise 7% to 8% from January to March,” says Adit Damodaran, economist at Hopper, the airfare deal-finding site. “But domestic airfares are up 36% since the start of the year,” he says. “That’s due in part to jet fuel costs, but there are all these other factors, too. That huge increase in February I think was primarily driven by demand recovering.”

“It makes sense that if fuel prices keep coming down, that that should result in lower airfares.”

Damodaran correctly points out that the number of passengers screened by Transportation Security Administration officers at airport checkpoints — known as TSA throughput — has risen to 85% to 90% of 2019 levels, a first since the beginning of the pandemic.

Then there’s the pilot shortage. “At the beginning of the pandemic, the airlines were worried about their entire future. And so they virtually stopped hiring, stopped training and stopped preparing for a future where they would need more pilots,” explains Scott Keyes, co-founder of Scott’s Cheap Flights, an email subscription service for flight deals. “Then travel rebounded far faster than many analysts predicted, and airlines were caught a bit flat-footed, where they didn’t have the number of pilots available to meet that booming demand.”

Of course, blaming soaring airfares on fuel prices is better PR. “Airlines can be a little bit disingenuous, thinking it’s an easier excuse to say ‘we have to hike prices because of high fuel costs,’” says Keyes. “Customers sort of understand and accept that narrative. Whereas airline executives might not be able to get away with saying ‘we want to do this to make more money or because we don’t have enough pilots to fly the planes because we didn’t plan well enough.’”

Counterbalances to High Airfares
While jet fuel prices, high demand and the pilot shortage are all conspiring to drive airfares up this summer, there are also factors that could mitigate that trend.

In the past week, jet fuel prices have dropped more than 6% worldwide and nearly 7% in North America, according to data from the International Air Transport Association (IATA), the trade association representing some 290 airlines around the world. If that trend continues, airfares should come down, according to economic theory. “There is a little bit of lag, usually, between those fuel price and oil price adjustments and when it appears in airfare,” says Damodaran. “It makes sense that if fuel prices keep coming down, that that should result in lower airfares.”

“The question travelers ought to be asking is: are cheap flights still popping up? And the answer to that is definitively, absolutely.”

Also, consider that the airline landscape looks a lot different than it did during the last oil crisis, which sent airfares rocketing in 2008. “Back then, only 4% of people flew on budget airlines in the US. Today it’s over 15% and rising. The budget airlines are four times larger than they were during the last oil crisis, and their ability to anchor the industrywide prices is much more prevalent today than it used to be,” says Keyes. “As much as major airlines would love to snap their fingers and say ‘we’re gonna make all fares 10% higher, 20% higher, they have trouble doing that because leisure travelers’ number one priority is cheap flights.”

“That limits an airline’s ability to pass along those costs,” says Keyes. “Customers will just fly a different airline that’s cheaper, or they’ll delay that vacation if it gets too expensive or not go or drive instead. It’s not as simple as the airlines saying ‘we’re just going to pass along 100% of the cost’. That’s fine for the investors. Will that actually play out? Call me skeptical.”

How to Snag a Reasonable Airfare This Summer
It’s a travel truism that if you want a cheap airfare, it’s always smart to book as early as possible.

“They say the best time to plant a tree was 20 years ago, the second best time is today,” says Keyes. “Similarly, the best time to book your summer flights would have been around Christmas, the opposite season, in the same way that swimsuits tend to be cheapest in the winter time.” Short of that kind of forethought, “I would not put it off until the last month, or even six weeks, before travel.”

“I would suggest having that trip for summer booked by April, maybe May at the latest,” agrees Damodaran. “The earlier you book, the better chance you have at getting a good deal in this environment.”

Another tip: Don’t watch for trends, watch for deals. “The ‘average airfare’ tends to be misleading because people think that they won’t be able to get cheap flights anymore,” says Keyes. “The question travelers ought to be asking is: are cheap flights still popping up? And the answer to that is definitively, absolutely. We find these deals every day. $215 round trip to Hawaii. $395 to Milan. $585 peak summer to the Greek islands. $579 to Australia. Are deals still popping up? Absolutely.”

No, The Biden Administration Is Not Giving Away Crack Pipes

Putin’s war against Ukraine may have spiritual, religious foundations: ‘Good vs. evil’