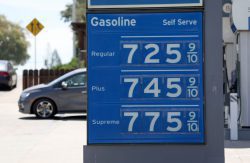 Gas prices over $7.00 per gallon are displayed at a Chevron gas station in Menlo Park, Calif., on May 25, 2022. (Justin Sullivan/Getty Images)

Americans want to go on vacation this summer despite concerns about rising gas prices and inflation, according to a May 25 survey by the American Hotel & Lodging Association (AHLA), but not without misgivings over costs.

About 57 percent of survey respondents said they still have plans to take a summer vacation this year, an increase in travel compared with 2021, but more than half said their trips would be fewer and shorter in 2022, and another 33 percent said they might cancel altogether due to inflation and higher gas prices.

According to the survey, about 46 percent intend to take an overnight trip for a family event, while 54 percent said they would likely take shorter trips than usual.

Average gas prices went up sharply in May, prior to the peak summer driving season, with no signs of relief.

The national average for regular gas hit another new high on May 31 at $4.62 a gallon, according to AAA, with prices up more than 50 percent compared to the same time in 2021.

National averages were nearly 50 cents more expensive in May than they were in April.

Prices at the pump usually peak mid-May, but this year, high costs are likely to continue to rise through the summer and possibly reach about $6 per gallon in August, according to analysts from JP Morgan.

Average gas prices have already climbed well above $6 per gallon in California, which is a bad sign for motorists across the country if the fuel shortages do not improve.

The Biden administration’s energy policies and the Russian conflict in Ukraine, with the consequential sanctions on Russian oil and gas, have caused already high fuel prices to skyrocket across the board.

In a May 31 interview with German news magazine Der Speigel, Fatih Birol, head of the International Energy Agency, warned that the current global energy crisis may even exceed the infamous 1970s oil shock by the summer.

About 90 percent of the AHLA survey respondents said they view inflation and gas prices as a factor on when or whether to travel during the peak season.

About 78 percent of respondents said they’re still taking the CCP (Chinese Communist Party) virus, commonly known as the novel coronavirus, into consideration regarding their summer plans.

“The pandemic has instilled in most people a greater appreciation for travel, and that’s reflected in the plans Americans are making to get out and about this summer,” said Chip Rogers, AHLA’s president and CEO, according to The New York Post. “But just as Covid’s negative impact on travel is starting to wane, a new set of challenges is emerging in the form of historic inflation and record high gas prices.”

West Texas Intermediate, the U.S. crude oil benchmark, closed at $115 per barrel on May 31 after reaching $118 the previous day.

Bryan S. Jung is a native and resident of New York City with a background in politics and the legal industry. He graduated from Binghamton University.

What is identity resolution and how are platforms adapting to privacy changes?

UK Shop Prices Growing at Fastest Rate in Over a Decade

Oklahoma signs into law strictest abortion ban in the US

Shen Yun ‘Something Very Positive’ After All ‘That’s Happened in the World’, Says CFO