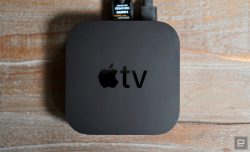 If you’ve been looking to grab a new Apple TV, you now have another chance to do so at a discount. The 32GB version of the Apple TV 4K device released in 2021 is now available for $150 at Amazon, or $29 less than its retail price of $179. That’s the lowest price we’ve seen for the streaming box on the website — it was only briefly available for that much last holiday season.

We gave the 2021 Apple TV 4K a score of 90 in our review and praised it for coming with an excellent Siri remote, which we think is a great selling point for the device. It’s larger than its predecessor, making it harder to lose, and we found its revamped directional pad easier to use for making fine-tuned selections. You can even use the pad as dial to scrub backwards and forwards in a video. We also found that the remote does an excellent job at interpreting our voice commands.

We praised the Apple TV for its quicker performance and capability to load apps faster than before, as well. Its A12 Bionic processor gives it the capability to support Dolby Vision content, HDR videos at 60FPS and Dolby Atmos for an immersive, room-filling audio. And, if you have an iPhone or an iPad, the streaming box is probably the option that makes the most sense for you. It will allow you to beam content to your TV via AirPlay and screen mirroring, and you’ll be able to use your iOS device to type in text on your TV. The Apple TV also comes in a version with 64GB of storage, though that one’s not on sale at the moment.

Property in Portugal Sells for 3 Bitcoins in Crypto Only Sale

Cybersecurity reporting mandates could make us more vulnerable, not less

IT infrastructure used to launch DDoS attack on Russian targets

Hitting the Books: Why we need to treat the robots of tomorrow like tools

Windows 11 is filling your hard drive with unwanted apps – so why not switch to Linux?