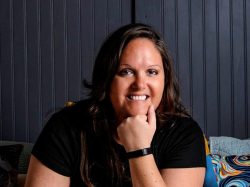 After selling their home in North Carolina and downsizing to a pop-up trailer, artist and ordained minister Dr. Angela Yarber, her wife, and two-year old embark on an 18-month cross-country trip during which the couple builds an off-grid home in Hawaii with help from Tiny House Nation. They also experience the agonizing helplessness of watching Yarber’s brother lose his battle with addiction. Joining their journey are 15 paintings, portraits of revolutionary women whose lives inspire thoughtful examinations of privilege, otherness, and the notion of The American Dream.

Dr. Yarber describes this time in Queering the American Dream (Parson’s Porch, March 2022). In this Q&A, conducted via email and lightly edited for brevity and clarity, the Florida resident shares details about the new book and her family’s journey.

About the book’s title—what you mean by “queering?”

When I talk about queering, I’m drawing on the brilliant, late bell hooks who claimed: “Queer not as being about who you’re having sex with (that can be a dimension of it); but queer as being about the self that is at odds with everything around it and has to invent and create and find a place to speak and to thrive and to live.”

Some people may object to an educated, cisgender, white woman writing about the struggles of People of Color and others with dissimilar backgrounds.

These forerunners have been ignored, excluded, and strategically erased from history books, stained glass, iconography, and other canons of influence, so I’m going to shout about them from the rooftops. Not in place of POC telling these stories, but alongside with humility and gratitude.

The author and her family

In the book, you examine the privileges life has afforded you. How much of that was done in real time and how much was done retrospectively?

It was a combination, but honestly much was done in real time. My wife has a Ph.D. in Ethics and Social Theory, so this is the stuff of our daily dinner conversations.

In each chapter, you draw inspiration from the women in your paintings, using their experiences to guide your heart and your actions. Was it part of your original idea to structure your book this way, or did it happen organically?

This happened organically. Many of the women were at the forefront of my mind in real time, but some came to the surface upon reflecting back, particularly after my brother’s death. Audre Lorde and Guanyin, for example.

Besides these fifteen, who else would you have liked with you?

Virginia Woolf came to mind a lot when creating our home and pondering what it means to have a “room of one’s own” in such a tiny space. Anna Julia Cooper’s notion of the “Singing Something” and the innate, divine spark dwelling within all humanity also resonates.

Who are today’s revolutionary women that inspire you—whose messages are neglected and need to be amplified?

The cover for Yarber’s new book

During the period covered in the book, what was the hardest truth, the most difficult thing you learned about yourself?

In the wake of my brother’s death, I’ve learned that I’m not as resilient as I thought, that the trauma my brothers and I share has simply manifested very differently in my life, and that it takes constant care, attention, therapy, and medication to grapple with it in restorative, life-giving ways.

The lovely tiny house in Hawaii—you built it as the first step in creating an eco-intersectional-feminist retreat but then had to leave after adopting a second child, one with special medical needs. Did you sell the property or are others using it for its intended purpose? Do you have any plans to go back there—either to the house specifically or to Hawaii at some point?

We had to sell the property, or we wouldn’t be able to afford a home elsewhere. Hawaii will always hold part of my heart, particularly Maku’u Point where parts of my brother’s ashes are scattered. But home is in St. Pete now. The dream and vision of the intersectionally ecofeminist retreat center—which is part of the Tehom Center non-profit—continues in our new home.

Can you say a little about your current projects?

There’s an art show, Queering the Dream, that corresponds with the book. It’s slated for Lancaster Priory in England this summer and Kennesaw State University in Atlanta during the fall. I’ve also hosted a pilot retreat called Queering the Dream and have more retreats scheduled for fall 2022 and winter 2023. And I’m currently teaching a graduate course that uses my book as a template for a future Queering the Dream course for adult learners with the School of Global Citizenry.

Plus, there are always more books stirring inside, hoping for a literary agent. The grief goddesses have more to say, particularly amid the collective grief of a pandemic. My time off-grid with mental illness may be a book. And since so much of my work involves teaching, art, and writing, I have a workbook I’m working on publishing, as well.

5 Unique Time Management Hacks That Have Been Proven to Work

‘This Is What We Trained For:’ Soldiers Depart to Help Humanitarian Crisis in Europe

Is ‘Environmental Racism’ Real or Just Another Woke Trojan Horse?

Low Blood Pressure Could Be a Culprit in Dementia, Studies Suggest