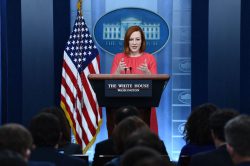 The White House says President Joe Biden is on track to make his selection to fill an upcoming vacancy in the United States Supreme Court in time to meet his self-imposed February deadline.

With the announcement of Supreme Court Justice Stephen Breyer’s retirement on Jan. 27, Biden said that he would fulfill a campaign promise by nominating the first-ever black woman to the high court and would do so by the end of February.

In an interview with NBC’s Lester Holt on Feb. 10, Biden revealed that the list of candidates being considered is down to “about four.”

And while the White House continues to be mostly secretive as to the president’s selection process, press secretary Jen Psaki repeated to reporters on Wednesday that the president will make his selection before the end of the month.

“The good news is March first is around the corner,” Psaki said. “We remain on track, and you don’t have too much longer to wait.”

When asked if the White House would reveal when the interviews for potential candidates are complete Psaki responded: “Unlikely. I will tell you—the president will tell you when there’s a nominee.”

When asked on Wednesday to respond to criticism from the left that Childs’s rulings have aligned too closely with corporate interests, Psaki pointed to an endorsement of Childs from South Carolina’s AFL-CIO. She added that the president will not be swayed by public comments on potential candidates.

“The president is not interested in public griping, or in lobbying campaigns or efforts to trash other candidates,” Psaki said. “He is going to keep his blinders on, look at the qualifications, the cases, the backgrounds, the credentials of these eminently qualified nominees. All of the ones he’s considering would make excellent, qualified Supreme Court justices and that’s where his focus remains.”

Childs has received support from South Carolina congressional members on both sides of the aisle, with Sen. Lindsey Graham (R-S.C.) and House Majority Whip James Clyburn (D-S.C.) voicing their endorsement.

Biden has said he expects his pick to garner support from Republicans and that he is not “looking to make an ideological choice.”

Biden met with Democrat members of the Senate Judiciary Committee last week to discuss the nomination, and while Psaki had no preview of plans for Biden to meet with Republicans, she said he is “continuing to engage with Democrats and Republicans.”

The World Watched Russia Bomb Ukraine’s Hospitals. What Happens Next?

Cybersecurity in a Digital World and the War for Talent