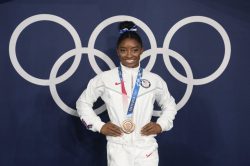 Biden’s honors list includes both living and deceased honorees. He will present the medals at the White House next week.

The 17 medal recipients are:

—Sandra Lindsay. Lindsay is a New York nurse who received the first dose of COVID-19 vaccinations in the United States on live television in December 2020.

—John McCain. McCain represented Arizona in both houses of Congress and was the Republican presidential nominee in 2008. He died of brain cancer in 2018.

—Denzel Washington. Washington is a double Oscar-winning actor, director and producer. He also has a Tony award, two Golden Globes and the Cecil B. DeMille Lifetime Achievement Award.

—Sister Simone Campbell. Campbell is a member of the Sister of Social Service and a former executive director of NETWORK, a Catholic social justice organization.

—Julieta Garcia. Garcia was a former president of the University of Texas at Brownsville.

—Gabrielle Giffords. A former U.S. House member from Arizona, Giffords was shot in the head in January 2011 during a constituent event in Tucson and was gravely wounded.

—Steve Jobs. Jobs was the co-founder, chief executive, and chair of Apple Inc. He died in 2011.

—Father Alexander Karloutsos. Karloutsos is the assistant to Archbishop Demetrios of America.

—Diane Nash. Nash is a founding member of the Student Nonviolent Coordinating Committee.

—Alan Simpson. Simpon is a retired U.S. senator from Wyoming.

—Richard Trumka. Trumka had been president of the 12.5 million-member AFL-CIO for more than a decade at the time of his August 2021 death. He was a past president of the United Mine Workers.

—Wilma Vaught. A brigadier general, Vaught is one of the most decorated women in U.S. military history. When Vaught retired in 1985, she was one of only seven female generals in the Armed Forces.

—Raúl Yzaguirre. Yzaguirre was president and CEO of the National Council of La Raza for 30 years. He served as U.S. ambassador to the Dominican Republic under Obama.

Alameda Ventures surrendered 4.5M shares in Voyager a week before it suspended trading

U.K. Airlines Banned From Russian Airspace As Moscow Hits Back At Western Sanctions

Rooftop Parking Lot Collapses Into Office Space Below in Vancouver