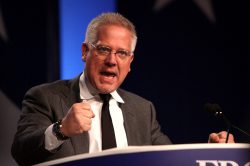 Not since the book “1984” have I read a book with such powerful warnings against the dangers of a totalitarian society—“The Great Reset: Joe Biden and the Rise of 21st Century Fascism” by Glenn Beck and co-written by Justin Haskins. While Beck is clearly against fascism and wants to end its rise, I believe that he also truly wants to educate the public. The book is filled with incredibly important information written in a way that is easy to understand. I believe that everyone would benefit from reading this book, no matter their political persuasion. Knowledge is power.

Cover of “The Great Reset: Joe Biden and the Rise of 21st Century Fascism.” (Glenn Beck.com)
The Great Reset
When Beck talks about the Great Reset, he means the radical transformation of society at every level. This highly influential movement that is happening worldwide is about the world’s elite “resetting” the global economy using banks, government programs, and governments.

There is no official Great Reset manual, framework, or agreement that all Great Reset advocates have signed up for. It has been kept purposely vague just how the Great Reset in final form will look. However, in the end, elites will be in charge of society and the global economy. There will be virtually no middle class, only rulers and their slaves. The Great Reset is 21st century fascism in action.

Great Reset advocates have already made inroads. According to Beck, this is a major reason why the world today has become a “fun house mirror distortion,” a world apart from what it was before the CCP (Chinese Communist Party) virus. The book explains why people are being “canceled” over the slightest societal misstep, why social media giants are scrambling to stifle speech at every turn, why large corporations are becoming the champions of “woke” causes, and so many more questions the reader might have. The book is worth reading even for this reason.

The CCP Virus
Elites were offered an excellent opportunity to advance their agenda when the U.S. economy experienced an unprecedented collapse after the CCP virus hit. Beck says, “It is almost certainly the first time in world history that a country as powerful as the United States consciously chose to decimate its own economy.”

Think about how insightful that statement is. It shows you the quality of Beck’s writing. He says that after the lockdowns, the steps which followed to supposedly “relieve the damage” just decimated the economy further and made people more dependent on central government.

Climate Change
The elites can’t justify building an entirely new economy based on economic damage and societal fears linked to a temporary crisis like the pandemic, so they merely renewed an emphasis on climate change. In the past, it has not been that easy to put forth ideas on climate change (although in recent years it has become more prominent in the news) because no matter how many times those predicting disaster say that “the end is near,” the end never comes. People’s very existence serves as proof against the claim of climate change.

Beck points out that, over time, the elites have developed ways to help advance the theory of climate change. I believe the reader will find this chapter eye-opening in seeing how those promoting the Great Reset, for their own ends, advocate distortion of people’s sincere beliefs. Some readers may be surprised that Beck shows a contrast between the sincere Greta Thunberg and cynical elites who just use climate change for their own scurrilous goals.

Modern Monetary Theory
“How are you going to pay for it?” was always the question in the past that leaders addressed. This is because money and resources are scarce. Countries have a limited supply of wealth, labor, and time.

Today the Great Reset elites are thinking in a different way about money by embracing modern monetary theory (MMT). This theory is that there is no need to worry much about the national debt and deficits, because the government can print and spend as much money as it wants to in order to achieve the goals set by the federal government’s bureaucratic masterminds and political elite.

Take the United States as an example of the use of MMT. The United States, a currency issuer, is in no danger it will ever become insolvent. The federal government has a monopoly on dollar production (money printing), so it cannot run out of money. If more cash is needed, all the government must do is turn on the printing presses—or more accurately, move numbers around on an electronic spreadsheet.

However, if the United States just prints more money and the amount of goods stay the same, more money will be chasing the same amount of goods. Prices will go up.  If inflation starts to get out of control, money needs to be pulled out of the economy either by the government taxing people more or the government spending less. Both have been proven historically extremely difficult to do and require a much less politicized budgetary process.

In other words, there is no free lunch. Elites are gambling with the future on a largely unproven economic theory.

Stakeholder Capitalism
Many readers may have noticed that many large companies have become “woke,” despite the fact that alienating half their customer base is a terrible business strategy. Under the “environmental, social, and governance” score system (ESG), companies no longer make decisions based on what the consumer wants. Now, it’s all about what those in power deem society should want. This is the Great Reset score system at work and eerily similar to the social credit system that the CCP has now.

The ESG system presents behaviors that are important to Great Reset power brokers. Energy, water, and land are factors in the environment (E); being “woke,” anti-white, and anti-police are part of the social justice (S) score; women, minorities, and corporate board of directors factor in the governance (G) score.

This model tells which businesses are good and which “scoundrel” companies are interested only in turning a profit, developing new products, and/or hiring more employees. Stakeholder capitalism is not capitalism at all. Stakeholder capitalism exists to serve the collective according to the demands of the ruling class in government, not individual customers and owners.

What We Can Do
Beck is not one to sugarcoat current events. The last chapter of his book says that time is running out. Reversing the Great Reset might be virtually impossible if it becomes fully established. He gives readers some ideas for how to stop the Great Reset before it’s too late to reverse course.

He encourages everyone to stand unwaveringly for the truth, no matter where it takes you. Don’t participate in anything that is a lie. People can become active in local affairs and businesses, since there is more control at the local level. He wants everyone to do their research and learn all they can. Finally, spread the word. He asks that everyone reach out to all, including those with differing social or political beliefs.

Beck encourages all of us to value what we have: “We owe it to ourselves, to those who came before us, and to the generations of Americans not yet born, who will someday remember and thank us for not throwing away our freedoms— and their future.”

The Great Reset affects everyone. There is no hiding. I strongly recommend reading this book.

‘The Great Reset: Joe Biden and the Rise of 21st Century Fascism’

Linda Wiegenfeld is a retired teacher. She can be reached for comments or suggestions at lwiegenfeld@aol.com

The Richest Person on Earth Breaks Every Rule. You Should Too