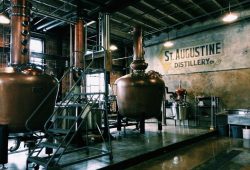 Tourism is a massive part St. Augustines business. The distillery has received over one million … [+] visitors since opening its doors in 2014.

Ever since St. Augustine Distillery broke ground on its facility inside an abandoned ice factory in 2011, founders Phil McDaniel and Mike Diaz have been every bit as passionate about enhancing the city in which their distillery resides as they are in the Floridian spirits they produce. Just building the distillery itself has made a positive impact on the area. The facility attracts 150,000 visitors annually and has served as an entertainment business incubator in the historic Lincolnville district. Since opening there have been three award winning restaurants along with three new hotels that followed suit by investing and helping to revitalize the area. More exciting projects are underway. And while it’s true that a healthy St Augustine is in the best interest of his company, the team’s local philanthropic efforts are widespread. In addition to building skate parks and a playground in the city, St. Augustine Distillers employees are poised to build their sixth home in partnership with Habitat for Humanity. The United Way named Diaz and McDaniel’s company Sponsor Of The Year in 2022 for its involvement with the community.

“Mike (Diaz), and I are at a stage in our lives where we realize that this is not forever. Improving on the town in which we live feels both essential and the right thing to do,” says McDaniel. “We see the distillery as an intersection between economic development and social good. Everything we do is designed to achieve these goals simultaneously.”

Phil McDaniel, left, and ike Diaz, right, are named Sponsor Of The Year by United Way for their … [+] philanthropic work in St. Augustine.

The contributions to their community Diaz and McDaniel are most proud of revolves around their advocacy for arts and culture in St Augustine. In 2017 the distillery’s began its partnership with the Cultural Event Division in St. John’s County and The St. Augustine Amphitheatre, a 5,000 seat venue dedicated to bringing live performances to a part of Florida previously overlooked by national acts. Here, the distillery and Amphitheater General Manager Gabe Pellicer created Sing Out Loud, a free concert series designed to boost tourism and support local musicians. Last month, the team partnered up again, this time to produce the Fort Mose (pronounced Mo-Say) Jazz and Blues Series, a charity event dedicated to raising awareness of the jazz genre, as well as the little known but incredible African-American history in St. Augustine, the first free black town in America.

“Gabe (Pellicer) and I are huge Jazz fans, and we wanted to promote the genre in this community,” McDaniel explains. “When we were seeking a location for a jazz and blues event, we visited the State Park at Camp Mose who we were helping to raise money to recreate a fort that existed on the site 280 years ago. When Gabe stepped in the back of the 20-acre grounds, he knew this was the right place for the festival. In the process, we could generate revenues to help build this fort and raise awareness of this important piece of African American history.”

An artists rendition of Fort Mose in 1738

The Story Of Fort Mose

According to Dr. Kathleen A. Deagan, Ph.D., a University of Florida professor and lead archaeologist at Fort Mose, the story here began in 1687. A canoe, carrying twelve formerly enslaved Africans fleeing their English overlords in South Carolina, arrived in the Spanish governed territory of St. Augustine, located in Florida just below the Georgia line. The Spanish government granted protection to these fugitives from extradition, promising eventual freedom in exchange for converting to Catholicism and adult males serving in the militia. Forty-five years later, a fortress named Gracia Real de Santa Teresa de Mose was constructed to protect the town from English infiltration. This fortress was manned by thirty-eight formerly enslaved men who formed the original Fort Mose militia.

St. Augustine was a known haven for escaped enslaved people by this time. Under the leadership of General James Oglethorpe, South Carolinian forces attacked St. Augustine in 1740. Eventually, African, Indian, and Spanish troops defeated Oglethorpe, but the fort was severely damaged. A second fort was constructed and remained there until 1763, when Florida became a British colony via the Treaty of Paris. The families of Fort Mose joined the Spanish evacuation and settled in Cuba.

The Count Basie Orchestra rearranged their tour schedule to help raise awareness of an important … [+] piece of American history.

Back To The Music

Stories like this are too often forgotten, but the history of Fort Mose was kept alive by residents who acquired and protected this site. The land on which the fort resided became a Florida State Park in 1986. It was also named a National Historic Landmark and a UNESCO World Slave Trade site.

The appeal was overwhelming when Pellicer reached out to artists to gauge interest in playing the inaugural Fort Mose Jazz and Blues Series in February. The Count Basie Orchestra, Amythyst Kiah, Gregory Porter, Tank and the Bangas, and Trombone Shorty & Orleans Avenue performed. Several musicians rearranged their tours for the opportunity to help create awareness of the fort and to raise money for its cause.

“When Gabe spoke to Scotty Barnhardt, the band leader for Count Basie, he was aware of the historical significance of this place as a North to South underground railroad,” says McDaniel. “The band rerouted and reduced their fee to be part of this festival. Additional acts like Gregory Porter, Tank and The Bangas, and Trombone Shorty followed suit. We tapped into something that Jazz artists want to support, and we are proud to support them back while restoring an important piece of American history here in St. Augustine.”

Ultimately, the Fort Mose Jazz and Blues Series attracted 3,000 attendees from across the country, raising $52,000 in support of Fort Mose Historical Society’s ongoing efforts of building an on-site fort representation and development of interpretive resources.

“Ten years after opening, some of the greatest moments we’ve enjoyed are being part of events, programs and initiatives that improve our community. Whether it’s putting a new family in their first Habitat home or bringing internationally recognized jazz and blues artists to perform and raise money to rebuild Fort Mose, knowing we are making our community better for future generations, well, that’s what makes it all worthwhile.“

Greens Senator ‘Out of Step’ on CCP Aggression: Defence Analyst