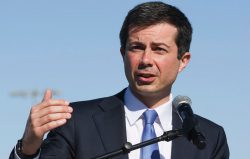 “I think we need to take a look at it,” Buttigieg told CNN’s Kate Bolduan yesterday. “Look, the airlines are often doing their own internal no-fly lists. Some of them have spoken about maybe coordinating on that and we’re looking at these policy recommendations as well — not that we are waiting for that in order to take action.”

In a letter written last week, Delta CEO Ed Bastian asked U.S. Attorney General Merrick Garland to take “the much-needed step of putting any person convicted of an on-board disruption on a national, comprehensive, unruly passenger ‘no-fly’ list that would bar that person from traveling on any commercial air carrier.”

Delta has put nearly 1,900 people on its own “no-fly” list for refusing to comply with masking requirements and has submitted more than 900 banned names to the TSA to pursue civil penalties. But as it stands right now, there’s nothing to prevent someone on Delta’s list from flying on another carrier.

Delta is “calling on our aviation partners to share their unruly passenger ‘no fly’ list to ensure individuals who have endangered the safety and security of our people do not go on to do so on another carrier,” Bastian wrote, noting that a federal list would be a more effective deterrent against unruly onboard behavior. “This action will help prevent future incidents and serve as a strong symbol of the consequences of not complying with crew member instructions on commercial aircraft,” he wrote.

Incidents of disruptive passenger behavior on flights have spiked during the Covid-19 pandemic. The Federal Aviation Administration (FAA) received a record 5,981 reports of unruly passengers in 2021, about three-quarters of which involved travelers who refused to comply with a federal mask mandate on board.

Throughout this period of increased bad behavior, flight attendants have born the brunt of the abuse. According to a 2021 survey of flight attendants, over 85% had dealt with unruly passengers in the first half of last year, when the most egregious incidents escalated to cause disruption on the flight and even, in some cases, violence. On an Alaska Airlines flight in March 2021, a Colorado man who refused to wear a face mask swatted at a flight attendant, then stood up and urinated in his seat area. In May of last year, a Southwest Airlines passenger punched out a flight attendant’s teeth after being told to keep her seat belt fastened.

As the number of unruly incidents has risen, government agencies have responded — albeit slowly. “The FAA has a zero-tolerance policy, fines have been increased, enforcement has been increased,” said Buttigieg. “We’ve seen some encouraging news in terms of downward trends in unruly incidents, but let’s be very clear: This is happening at an unacceptable rate.”

“Anything besides zero is an unacceptable rate,” said Buttigieg. “It is a safety concern when anybody is acting up on an airplane.”

The Russian Air Force Is Losing Its Best Jets Over Ukraine

Lack Of Engagement By Remote Workers Can Lead To Their Early Termination: New Study

Funding Boost for Allergic Diseases and Anaphylaxis Research in Australia