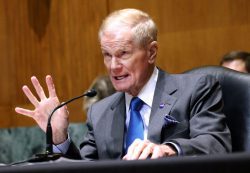 NASA Administrator Bill Nelson has warned that China is using its space program to attempt to take over the moon, a claim the Chinese regime denies.

Nelson told German outlet Bild on July 2, “We must be very concerned that China is landing on the moon and saying: It’s ours now and you stay out.”

The purpose of China’s space program, Nelson said, “is a military space program,” and its accomplishments are built on technology theft.

“This is not the first time that the NASA administrator has lashed out at China in disregard of facts,” said Chinese foreign ministry spokesman Zhao Lijian.

“China always advocates the peaceful use of outer space, opposes the weaponization of and arms race in outer space,” he added.

However, experts told the Chinese language edition of The Epoch Times that the theft of space technology is common by the Chinese Communist Party, and that the space program itself is part of the Strategic Support Force of the military.

Technology Plagiarism
Nelson warned about the space race with China in a Congress hearing on May 17. In particular, he warned about China’s aggression in outer space and the cyber security risks posed by technology theft. He said, “They are pretty good at stealing.”

Yue Changzhi is an electronics engineer retired from the No. 2 Institute of the Ministry of Aerospace Industry of China.

She told The Epoch Times that she has no doubt that Beijing advanced its aerospace technology by relying on stealing.

She said that the thefts started in the 1960s when she was hired at the ministry. Her task was in the development of missiles and anti-missile systems in the electronic department.

“It was the early time when the Ministry of Aerospace Industry was just established. Plagiarism has been its approach, that is, to make a copy of things invented by others with a slight change in appearance,” Yue said.

The Yutu-2 moon rover, taken by the Chang’e-4 lunar probe on the far side of the moon. Picture released on Jan. 11, 2019. (China National Space Administration [CNSA] via CNS/AFP/China OUT)
Military Ambition
Nelson issued a statement on May 19, 2021 after China released the first photos from the Zhurong Mars rover.

“Congratulations to the China National Space Administration on receiving the first images from the Zhurong Mars rover!” Nelson said.

However, in this year’s Congress hearing Nelson warned that it is “incumbent upon us to take cyber security very very seriously … with regard to the government but the private sector as well.”

When asked what military purposes China could pursue in space, Nelson bluntly answered: “Well, what do you think is happening on the Chinese space station? They learn there how to destroy other people’s satellites,” reported Bild.

Commentator Wang He pointed out that the Chinese aerospace program was built in affiliation with the People’s Liberation Army (PLA).

He explained that satellite launch centers such as Jiuquan and Taiyuan are both under the control of the military. Both centers are located at the testing and training base of the PLA’s Strategic Support Force.

He further emphasized that in recent years, the regime manipulated its claim “to utilize outer space for peaceful purposes, promote mankind’s civilization and social progress,” as a cover for seeking international collaboration for the purpose of stealing technologies.

He said, “The so-called Chinese private companies involved in the international collaboration are still under the control of the Communist Party.”

In other words, they are “the front companies,” He stated.

Lin Cenxin and Chang Chun contributed to this report.

Mary Hong has contributed to The Epoch Times since 2020. She has reported on Chinese human rights issues and politics.

Mega drought in US spells trouble for Hoover Dam reservoir