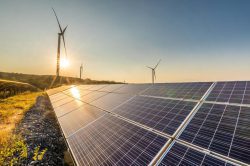 This week’s Current Climate, which every Saturday brings you the latest news about the business of sustainability. Sign up to get it in your inbox every week.

A new report from consulting firm Deloitte suggests that failure to act on climate change could cost the global economy over $178 trillion over the next 50 years. That’s a nearly 8% drop in global GDP caused by factors like heat stress, sea-level rise, damage to infrastructure from wildfires and extreme weather, health impacts, agricultural losses and more. “Translated into human terms,” the report says. “Crops would fail. Health care spending would rise. People would stop traveling.”

But hope is not lost: the report also focused on what happens if countries and companies make a firm commitment to get to net zero carbon emissions by mid-century. The bottom line? $43 trillion added to the global economy. The report emphasizes that many of the technologies and business models to rapidly decarbonize exist: they just have to be implemented. “Such a transformation,” the report says. “Could reduce the economic harm of continued warming and bring new jobs, industries, innovations and opportunities in a decarbonized global economy.”

Get Ready For $8-A-Gallon Gas
The pandemic killed demand for oil and gas, leaving the world vulnerable to Vladimir Putin’s supply-side punch. The upside? Widespread shortages and sky-high prices will finally force meaningful investments in alternatives and even pariahs like nuclear and wood. Read more here.

Discoveries And Innovations
Traditionally, the wildfire season in California runs from late summer through fall, but it seems like it’s already started this year. So far, over 9,000 acres have already burned across the state and in May alone there have been 10 incidents.

According to a recently published study, if extreme temperatures continue in the Kalahari Desert, the southern yellow-billed hornbill will become extinct in the hottest parts of its range by 2027.

According to a new report from NOAA, greenhouse gas pollution trapped 49% more heat in the atmosphere in 2021 than it did 30 years ago.

Sustainability Deals Of The Week
Alameda County, CA-based East Bay Community Energy announced this week that it will work with energy company Fervo to add geothermal power to its grid, enough for over 44,000 homes. The project is expected to be complete in 2026.

On Thursday, NatureMetrics raised a $15 million venture funding round, led by investor 2150. The financing will enable it to expand its technology platform, which uses DNA to monitor biodiversity to help its customers meet regulatory disclosure requirements.

Vertical agriculture company Bowery Farming opened up a new commercial smart farm in Bethlehem, Pennsylvania. The company says the farm is powered by 100% renewable energy and will be able to bring fresh produce to retailers serving 50 million people in the region.

On The Horizon
China aims to create 450 GW of solar and wind capacity in its desert regions. Which means lots of manufacturing of turbines at a time when U.S. manufacturing is dwindling. That could put pressure on the U.S.’s own plans to build out renewable capacity.

What Else We’re Reading This Week
A Hot, Deadly Summer Is Coming With Frequent Blackouts (Bloomberg)

Everything’s going electric, but not every EV will be battery-powered. In the years to come big heavy things like semi-trucks, trains, ships and other types of vehicles ill-suited for giant battery packs are going to get electric propulsion power from hydrogen. The universe’s most abundant element has been an elusive clean fuel option for decades, bedeviled by the difficulties of generating the energy-packed element in an efficient, low-cost method and without carbon emissions. CoorsTek, a low-key giant in the world of engineered ceramics and led by the Coors brewing family, says it has a highly efficient new method to make hydrogen fuel that works with existing energy infrastructure.

EV Charging Costs From $0.15 Per Mile Down To Free; How Should They Price It?
What should EV charging cost? That turns out to be a tricky question. Current prices are all over the map, ranging from free to “more than gasoline” and they include billing by the minute, by the kilowatt-hour or both, and adding session fees, flat fees or idle fees after the car is done. Some networks have a monthly fee which gives a kWh discount. All of these approaches have reasons behind them, and on one hand they are confusing and on the other hand a lot of EV drivers barely care at all. It’s a very different world from the fairly simple, and relatively uniform pricing of gasoline sold by the gallon. Read more here.

Best Wireless Mouse Deals: Save on Mice for Travel, Gaming and Everyday Computing

Battered U.S. stocks may not be bargains as investors brace for inflation data

Wasabi Versus Samourai: TX0 Has Nothing To Do With It

China Plans System to Take Out Asteroids Hurtling Toward Earth

Luna: Why I sold my UST for 95 cents on the dollar today