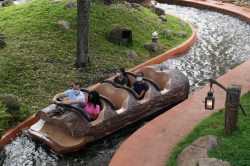 ANAHEIM, Calif.—Disneyland’s classic Splash Mountain will be known as “Tiana’s Bayou Adventure” when it reopens, officials announced during the ESSENCE Festival of Culture in New Orleans on July 1.

The revamped attraction was named after Disney’s animated film “The Princess and the Frog,” which was also set in New Orleans and takes place in the year 1926.

The ride will reopen at both Disney World’s Magic Kingdom in Florida and Disneyland in California in late 2024, according to Disney Parks Blogs.

“Picking up where the film left off, guests will join Princess Tiana, Naveen and jazz-loving alligator Louis on an adventure through the bayou as they prepare to host a one-of-a-kind Mardi Gras celebration where everyone is welcome,” wrote Carmen Smith, senior vice president of creative development for Walt Disney Imagineering, on Disney Parks Blog.

Splash Mountain, a Disney ride will be ‘completely reimagined’ into a The Princess and the Frog theme. (Courtesy of Disney)
The Splash Mountain ride opened in Disneyland in 1989 and was themed after the 1946 film “Song of the South.” It features singing animatronics as log riders follow Br’er Rabbit on an adventure with Br’er Bear and Br’er Fox in pursuit.

In recent years, Disney has received complaints from some activists and academics about the theme of the ride and the way the movie “Song of the South” depicts black people. The ride will now be based on the popular 2009 film about Tiana, the first black princess featured in a Disney animated movie.

The character Brer Rabbit, from the movie, “Song of the South,” is depicted near the entrance to the Splash Mountain ride in the Magic Kingdom at Walt Disney World in Lake Buena Vista, Fla., on March 21, 2007. (John Raoux/AP Photo)
During the ESSENCE Festival, Disney Imagineering’s team members discussed the creative process of the ride’s new design with fans, including conducting in-depth research of the time period in which the story takes place to make sure Tiana’s look was authentic to the character and historically accurate.

While many applauded the change, other Disneyland fans have opposed altering the iconic ride and suggested that Disney should build a new ride about Tiana.

“The Br’er Rabbit tales are important to Black culture. Re-theming this ride is condoning the erasure of authentic Black culture. I understand the need for more diverse representation, but it is possible to achieve this goal without destroying an iconic attraction such as Splash Mountain,” a Disneyland fan who identified herself as Caroline commented under the announcement.

Agreeing with Caroline, another Splash Mountain fan, Crystal asked “So sad…why does everything have to be taken away? Why can’t Splash Mountain stay and just add a new Tiana ride?”

Huntington Beach Voters to Decide on Legalizing Sale of Cannabis

What effect will a summer of international travel have on the pandemic?