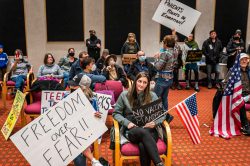 Enrollment in PPS, the largest district in Oregon, dropped by nearly 7,000 students, or 8 percent, in the past two years, according to state data. Although enrollment has declined by 1.41 percent statewide, PPS had a larger loss of students at 3.84 percent during the same time frame.

In a statement to staff, PPS deputy superintendents Claire Hertz and Cheryl Proctor attribute the decline to “decreasing birth rates, enrollment patterns, school reconfiguration, and choices families have made during the pandemic.”

Oregon’s embrace of homeschooling during the pandemic may be a factor.

Students registered for homeschooling nationwide doubled between spring of 2019 and fall of 2020, according to the U.S. Census Bureau. In Oregon, homeschooling enrollment increased by 73 percent in that same time frame.

For Ashley Darcy, a contentious Molalla School Board meeting about COVID-19 protocols last fall was the final straw.

“My husband and I walked out of that meeting and we were done,” Darcy told The Epoch Times. “We won’t vaccinate our kids and mask them and let that stunt their development. And we won’t give the power to teachers who are bullying students into following mandates.”

Darcy was particularly concerned that her youngest child, a first-grader, would be impacted by school mask mandates.

“He has a speech issue and he’s a lip reader,” she explained. “He needs to be able to see his teacher’s mouth so he can watch pronunciation. Masking in school just doesn’t work for us.”

So the Darcys pulled their three elementary-aged children out of public school.

“I don’t know how kids learn anything in the current school environment,” she told The Epoch Times. “We spend so much time lining kids up, washing their hands, keeping them six feet apart in the hallway. The amount of time that public schools spend to keep healthy kids healthy is just insane.”

Oregon has announced that it will lift its indoor mask mandate on March 31 but continue to allow individual school districts to keep it in place. Oregon Health Authority and Oregon Department of Education have not addressed whether it will keep the other myriad COVID-19 protocols in place.

Meanwhile, with so many students leaving school, it’s not yet clear how PPS will be impacted financially. Reductions in state school funding could be more apparent in the coming year. But, for now, Portland Public School leaders don’t seem concerned.

According to a Portland Business Alliance State of the Economy report, released on Feb. 16, “enduring pandemic impacts, a deepening affordability crisis, and reputational challenges continue to hinder the region’s growth and overall prosperity.”

The alliance report specifically sounds the alarm on the city’s downtown, pointing out that foot traffic is down more than 70 percent in the past two years and the number of people working downtown is down by two-thirds. In addition, the local job market is lagging behind the U.S. average, with Portland growing at 2.1 percent compared with the national average of 2.8 percent.

The report identifies Portland’s high tax burdens and lower median household incomes as contributing to an affordability crisis for residents as well.

“Our central city occupancy in September lagged behind every competitive city that we track except for Minneapolis and San Francisco,” Jeff Miller, president and CEO of Travel Portland, told the Portland City Council at a meeting in October. “Recovery is happening elsewhere, just not here.”

In a survey commissioned by Travel Portland, two-thirds of respondents said that racial and social justice protests make them less likely to visit Portland in the next two years.

The situation for the city is dire.

“We are at an economic crossroads,” Alliance President and CEO Andrew Hogan wrote in the report. “Policy and elected leaders must pivot away from complacency and urgently collaborate on all levels of government to retain and attract employers and households.”

As founding editor of GeoIntelligence and Geospatial Solutions and editor in chief of GPS World, Scottie Barnes has examined the implications of public policy and emerging technologies on areas ranging from homeland security and national defense to forestry and urban planning. She now provides breaking news and investigative reporting from the Pacific Northwest for readers of The Epoch Times.

On the front lines with volunteer Ukrainian soldiers near Izium