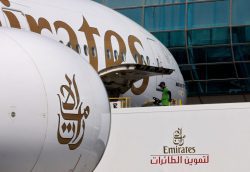 A picture shows an Emirates Airlines plane being unloaded the Dubai International Airport on Feb. 1, 2021. (Karim Sahib/AFP via Getty Images)

An Emirates flight from Dubai flew for more than 13 hours to Australia with a large hole on its left side.

It took off on July 1 and landed safely at night but passengers noted a surprising discovery on arrival.

The Middle Eastern airline says the hole was created when one of the Airbus A380’s 22 tyres burst shortly after take-off in Dubai.

The explosion ruptured the exterior of the aircraft. No passengers were injured.

Andrew Morris, professor at the UK’s Loughborough University who was travelling on the flight wrote on Twitter: “Was absolutely terrifying at first and the cabin crew knew something serious may have happened—were immediately in contact with the cockpit.”

“Shortly after, they resumed as normal. Their calm demeanour was reassuring—they knew it was not catastrophic.”

According to the commercial aviation website Aviation Herald, the crew suspected a blown tyre on takeoff and advised Brisbane Airport’s emergency services to be on standby for the landing.

Emirates later issued a statement saying the aircraft had landed safely in Australia.

“Our flight EK430 flying from Dubai to Brisbane on July 1 experienced a technical fault during the cruise,” the statement read.

“The aircraft landed safely in Brisbane and all passengers disembarked as scheduled. The safety of our passengers and crew has always been our top priority.”

Spotlight on Emirates’ Safety Record
This is the third major safety-related incident for Emirates since late last year.

On Jan. 9, an Emirates flight began taking off without formal clearance. The crew managed to stop the take-off by a minute, avoiding any damage or injuries.

Earlier on Dec. 20, it was reported that a plane departing Dubai for Washington D.C. overran the runway while taking off, narrowly missing houses close to the airport.

The Boeing passed over the first private homes nearly 6,000 meters past the runway threshold, flying 75 feet above ground level.

Jessie Zhang is a reporter based in Sydney covering Australian news, focusing on health and environment. Contact her at jessie.zhang@epochtimes.com.au.

: ‘Fewer signed contracts, fewer bidding wars’: A slowdown in Manhattan real estate may be a grim warning for the U.S. housing market

Federal Government Sends $2B in Health Transfers, Other Funding to Provinces