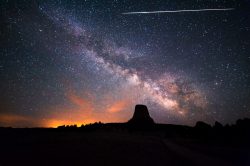 Meteor streaks delighted skywatchers this weekend as the Earth passed through the dust trail of Halley’s Comet in an annual meteor shower display.

The Eta Aquarid meteor shower, which is visible in both the Northern and Southern hemispheres in the constellation Aquarius, peaked this weekend with the most ideal observing times in the wee hours of the morning after 3 a.m. local time, weather permitting.

Skywatchers were expected to see as many as 30 meteors an hour streaking through the Earth’s atmosphere in a late spring “shooting stars” display. The event is best known for fast-moving meteors with long trains, moving as fast as 41 miles (66 kilometers) per second, according to the American Meteor Society.

Related: The best meteor showers of the year

Check out these stunning Eta Aquarid meteor shower photos by skywatchers who stayed up late (or rose super early) to catch a glimpse of leftovers from Halley’s Comet lighting up Earth’s sky.

BEAUTIFUL ETA AQUARID GRAZING FIREBALL #SPMN060522B AS RECORDED TODAY at 2h03m35s UTC from Olocau, #València by Alex Gómez & Juan Gómez. With the radiant close to the horizon, cometary bolides increase their length and duration. More details in our list:https://t.co/CRfB0fblVv pic.twitter.com/x1IXmv0k47May 6, 2022

I seemed to have caught maybe 1 or 2 meteors from tonights Eta aquarid shower, this one was a beautiful greenish colour, backdropped by the milky way around 3am. #etaaquarid #Meteorshower #swansea #nasa #bbcskyatnight #Meteor #wales #stargazingwales #space #milkyway pic.twitter.com/AJbjaek02yMay 7, 2022

Blink or you’ll miss the meteor! One of several Eta Aquarid meteors we saw in the wee hours of pre dawn. I saw 4 (out of a possible 25). Super chuffed 🤩 pic.twitter.com/bd0ci3LIEVMay 6, 2022

Our favorite meteor story from this year came from Ric Kearbey, a meteorologist at 10 Tampa Bay WTSP in Florida. Kearbey and his daughter, Kayleigh, were both outside hoping to see a shooting star, as he recounted on Twitter.

Kearbey joked, “Anyone else need her prayers?” while posting a picture of himself and Kayleigh, who is about five years old, judging from past social media posts by Kearbey.

Kyleigh & I went out to see the Eta Aquarid Meteor Shower. She said, “I don’t think we’ll see any.” I told her let’s say a quick prayer. We did and boom, we saw the most amazing meteor I’ve ever seen. Huge, bright & lit up they sky for 15 seconds. Anyone else need her prayers? 😁 pic.twitter.com/GoEOqKdpiPMay 6, 2022

Instagram was also full of shower views from the Southern Hemisphere and from countries such as Japan.

Editor’s note: If you snap an amazing photo of an Eta Aquarid meteor or any other night-sky sight and you’d like to share it with Space.com for a story or image gallery, send images, comments and location information to spacephotos@space.com.

Join our Space Forums to keep talking space on the latest missions, night sky and more! And if you have a news tip, correction or comment, let us know at: community@space.com.

Elizabeth Howell, Ph.D., is a contributing writer for Space.com since 2012. As a proud Trekkie and Canadian, she tackles topics like spaceflight, diversity, science fiction, astronomy and gaming to help others explore the universe. Elizabeth’s on-site reporting includes two human spaceflight launches from Kazakhstan, and embedded reporting from a simulated Mars mission in Utah. She holds a Ph.D. and M.Sc. in Space Studies from the University of North Dakota, and a Bachelor of Journalism from Canada’s Carleton University. Her latest book, NASA Leadership Moments, is co-written with astronaut Dave Williams. Elizabeth first got interested in space after watching the movie Apollo 13 in 1996, and still wants to be an astronaut someday.

Life’s blueprint may have come from asteroids, new discovery shows

Foldable iPhone display tech might be in the works, report claims

Urgent candy recall: Skittles, Starburst, and more may be dangerous to eat