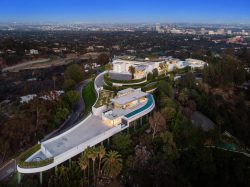 Headline grabbing ‘The One,’ once planned to be listed at $500 million by developer Nile Niami, has officially sold at auction for $141 million.

The One sold for $141 million at auction.

It was recently revealed the buyer is fast fashion brand Fashion Nova CEO Richard Saghian, who paid $126 million for the property plus an auction premium of $15 million. As the highest bidder, he got quite the deal, considering the home was listed at auction for $295 million, though without reserve.

Co-listing agent Aaron Kirman of Aaron Kirman Group at Compass tells Forbes that they showed the home to over 40 billionaires from around the world, however when it came time to enter the auction, just five bidders participated.

Richard Saghian, CEO of fast fashion brand Fashion Nova, was revealed as the buyer of ‘The One.’

“Our goal was to secure over $200 million,” Kirman says. “The marketing campaign we did was tremendous and felt around the world from Africa to Oceania and beyond. The main challenge was the lack of certificate of occupancy. Most wealthy people at this level, all they want to bring is their toothbrush. Usually they even buy these homes with art, furniture and cars. Everyone loved the idea and opportunity of the house, but I think the majority of people didn’t want to go through the process of getting the certificate of occupancy.”

Developed by Nile Niami, the massive residence was once valued at $500 million. The estate took more than 10 years to build and created massive debt for Niami, who experienced cost overruns and many delays. His development company, Crestlloyd, which owns the property, put the property into bankruptcy last year. Delays, foreclosure proceedings and the lack of certificate of occupancy made it increasingly difficult to find a buyer. Even today, the home has nearly a year’s worth of work, or more, before it’s officially completed.

If it did sell for auction at the price of $295 million, it would have been the most expensive home to have ever sold in the U.S. Still, billionaire and hedge fund tycoon Ken Griffin’s $238 million New York penthouse still holds the record. However, at 105,000 square feet, the home is the largest in Los Angeles, and the fourth largest sale in California’s history.

The hilltop estate has 21 bedrooms and 42 bathrooms, plus an exhaustive list of ostentatious amenities, like a putting green; 10,000-bottle wine cellar; multiple pools; a candy room; hair salon; spa; bowling alley; casino; and more. The home hasn’t come without scrutiny for its garish nature. According to WSJ, the nightclub was transformed into a philanthropy wing after pushback from the local community. The home was built by architect Paul McClean, who coincidentally developed Saghian’s Hollywood Hills home and perhaps one of the draws for the fast fashion CEO to purchase the home. The beautiful setting also has potential for photoshoots and filming purposes for his fashion company.

“It’s one of the finest homes in the world,” Kirman says. “I do think he intends to live there, but it’s also an amazing home to live, work, make money and do everything else. It is a world of endless possibilities.”

While Saghian declined to comment on the purchase further, he told the Los Angeles Times: “‘The One’ Bel-Air is a once-in-a-lifetime property that can never be duplicated. There is nothing else like it. As a lifelong Angeleno and avid collector of real estate, I recognized this as a rare opportunity that also lets me own a unique property that is destined to be a part of Los Angeles history.”

The home was co-listed by Branden and Rayni Williams of The Beverly Hills Estates and Kirman. The Williamses and Stuart Vetterick of Hilton & Hyland represented Saghian in the deal.

Ladies and Gentlemen, Please Fasten Your Seatbelts and Prepare for Landing

What Is an RMD and How Will It Help You Retire?