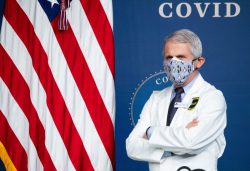 White House COVID-19 adviser Anthony Fauci said this week that it’s time for the United States to start heading back to normalcy after two years of lockdowns, vaccine mandates, and other COVID-19-related rules.

“The fact that the world and the United States and particularly certain parts of the United States are just up to here with COVID … they just really need to somehow get their life back,” Fauci told the Reuters news agency on Wednesday. “You don’t want to be reckless and throw everything aside, but you’ve got to start inching towards that.”

Fauci’s comments come as some Democrat-led states have started to rescind mask or vaccine mandates, and officials in Philadelphia and Washington dropped vaccine passports to enter certain businesses.

But in a separate interview with CNN on Thursday, Fauci said he believes it’s “risky” for the Centers for Disease Control and Prevention (CDC) to rescind mask mandates and recommendations because “97 percent of the country is within that zone that the CDC recommends to keep the masks on.”

As those states started to pull back, Republicans questioned the timing and said that Democrats are fearful they will suffer significant losses during the 2022 midterm elections if they keep pushing COVID-19 rules. Currently, Democrats have slim majorities in the House and Senate, and historically, the party of the president tends to lose seats in midterm elections.

“I find it very disingenuous that all of a sudden, as we get closer to the elections and the midterms that they decide to follow the science. They’re following political science,” Rep. Buddy Carter (R-Ga.) told NTD’s “Capitol Report” on Feb. 10.

But in a recent interview, Fauci suggested that it’s not because of polling numbers.

“I wouldn’t say it’s the politics. I think it’s the different evaluation of what’s right for a particular community,” Fauci told MSNBC on Tuesday.

However, even some Democrat elected officials have sounded the alarm on COVID-19 politics. Rep. Sean Patrick Maloney (D-N.Y.), the head of the House Democrats’ campaign organization, said Thursday that members of the party shouldn’t “[fall] in love” with mandates.

“We as Democrats should not be, out of some sense of correctness, falling in love with mandates when they aren’t necessary,” he told MSNBC. “We should get rid of them as quickly as we responsibly can.”​

A recent poll from Monmouth University showed that around 70 percent of Americans agree with the statement: “It’s time we accept that COVID is here to stay and we just need to get on with our lives.” Meanwhile, internal polling numbers obtained by SFGATE suggest that a majority of Americans believe Democrat officials have “taken things too far” in their pandemic response.

COVID-19 is the illness caused by the CCP (Chinese Communist Party) virus.

In Shanghai, police officers break down a door to take residents to quarantine centre