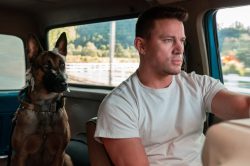 What’s a Dogface? It’s what U.S. Army soldiers call each other (a Marine better not call a soldier a Dogface, though). But first, let’s get the K-9 issue out of the way, shall we? Oh—by the way, “Dog” is a road-trip movie about a combat-damaged Army Ranger, traveling from Montana to Arizona with a military K-9 (canine) Belgian Malinois warrior dog. Both have PTSD and other health issues. It’s a fun movie. I’ll get to all that in a minute.

Some animal rights activists and vegans have strong opinions about using  K-9’s for police work and in battle. Dogs and horses have been used in that capacity since the dawn of human conflict. After reading “Warrior Dog” and other books about dogs in battle, I’m all for it.

What sold me was that when Navy SEALS initially started working with dogs, they were skeptical. What sold them, was when  their new K-9 teammate, given the command to locate explosives, enthusiastically dragged them a mile and a half, through an Iraqi sandstorm, and ran straight to a bicycle leaning against a building. The reason? The dog had smelled three bullets in a plastic bag, tied underneath the bicycle seat. Let’s recap: smelled three bullets, in a plastic bag, a mile and a half away—in a sandstorm. Any remaining doubts that the supernormal sniff capability of the doggo-nose is a military force-multiplier? Ok now, we can talk about the movie.

Lulu (played by either Britta, Lana, or Zuza) and Jackson Briggs (Channing Tatum) drive from Montana to Arizona, in “Dog.” (Metro-Goldwyn-Mayer/United Artists Releasing)
Channing Tatum’s Directorial Debut
“Dog” follows Army Ranger Jackson Briggs (Tatum) who’s desperately trying to get back to doing what he does best (warfighting) after recuperating from a brain injury that terminated his career.

His commanding officer assigns him instead to drive Lulu, a Ranger K-9 who served in Afghanistan, to Arizona in his ’84 Bronco, for the military funeral of his ex-teammate Riley Rodriguez (Eric Urbiztondo), who was also Lulu’s handler. Lulu will be euthanized, post-funeral, because her PTSD and anxiety make her too dangerous for adoption (Lulu is played by three dogs: Britta, Lana, and Zuza).

Jackson Briggs (Channing Tatum) and Lulu (Britta, Lana, or Zuza) get ready to attend the funeral of Lulu’s former handler, in “Dog.” (Metro-Goldwyn-Mayer/United Artists Releasing)
It’s a difficult but mutually life-altering road trip for both of them, as Briggs and Lulu are both suffering from their time in the teams. “Dog” follows their misadventures, some funny, some sad, as they inadvertently stumble upon a “sea of green,” (a marijuana plantation) hidden in the woods. Gus, the “farmer” (Kevin Nash, former WWE professional wrestler) shoots Briggs with a tranquilizer gun to comic effect.  Gus’s questionably psychic wife (Jane Adams) sets in motion the healing of Lulu’s psychological issues.

Later, Briggs and Lulu crash a five-star hotel by pretending to be a blind vet with a seeing-eye dog, which is fun until the dog obeys its years of training and starts mauling a man in the lobby dressed in Middle-Eastern Taliban garb. (He’s a doctor.)

Will Briggs get out of jail and get Lulu to the funeral on time? Will he hand Lulu over to the base military police to be disposed of? Will they heal their psychological war wounds?

No Footage of Combat Mauling
“Dog” is a lighthearted comedic handling of what could easily be much darker. These dogs are weaponized, after all. Special operators don’t call them “fur missiles” for nothing. But it’s mostly Channing Tatum directing himself in his stock character of a hunky, low-key, affable, quippy meathead who happens to be chauffeuring a high-maintenance ex-fur-missile 1,230 miles. There’s much wheedling, cajoling, sweet-talking, pleading, bickering, and fighting with his passenger, who’s excess energy, among other things, leads to passenger seats being mauled beyond recognition.

Lulu (Britta, Lana, or Zuza) demolishes Jackson Briggs’s (Channing Tatum) truck upholstery, in “Dog.” (Metro-Goldwyn-Mayer/United Artists Releasing)
The comedic potential of playing a gung-ho Ranger off Portland, Oregon’s woke, 20-something populace is amusing. Like the granola-crunchy tantric sex therapists Briggs meets in a bar, and the various toxic feminists who spew vociferous opinions about the hard men who stand guard over America’s freedoms (so they don’t have to).

“No! This is MY unicorn!” Lulu (Britta, Lana, or Zuza) wants to play with Briggs’s (Channing Tatum) new toy, in “Dog.” (Metro-Goldwyn-Mayer/United Artists Releasing)
We learn about the combat/medical-history journals that Rangers create for their dogs, which include photos, sketches, and operation summaries.

“Dog” maintains the “buddy comedy/road trip” vibe, while simultaneously illustrating that warrior dogs are heroic in their own right. According to Buddhist philosophy, such dogs will have paid so much of their karmic debt, that in their next incarnations, they will return as humans.

Jackson Briggs’s (Channing Tatum, L) and staff Sargent Jones (Luke Forbes), in “Dog.” (Metro-Goldwyn-Mayer/United Artists Releasing)
More About Warrior Dogs
The following is not emphasized in the movie, but that fact is, K-9’s noses and bite-ability save countless human lives. For example, the Belgian Malinois used by U.S. special operations military are not just, say, Navy SEAL dogs; they’re dog Navy SEALS, the canine equivalent of their human teammates. They’re handpicked for natural tendencies that make them the most hyper, energetic, incredibly annoying dogs that no regular human could handle. Military handlers then take that raw talent and train them into highly disciplined warriors.

Channing Tatum poses in front of a war memorial painting for K-9’s for “Dog.” (Metro-Goldwyn-Mayer/United Artists Releasing)
We needn’t get too sentimental about it. Military personnel are warned by dog handlers not to treat the dogs like Fido. When they crawl up on the couch to watch TV and put their paw on you, it’s not cute—the dog is establishing dominance. They’re extremely dangerous.

No, dogs didn’t ask to go to war, but they also, ironically, didn’t ask to become the massively genetically tampered-with Chihuahuas and Shih Tzu’s that some of the people who complain about the “cruel fate” of war dogs tend to own. Warrior dogs have reclaimed their wolf-ness. They have not been e-wolf-ulated. “Dog” is a fun movie about that. And about mutual healing. And man’s best friend.

‘Grandeur of a nation’: AFCON champions Senegal finally get a world-class stadium

I Don’t Know How To Feel About ‘Hogwarts Legacy’

Shen Yun Reminds Us ‘We Are Spiritual Beings, Even If We Live in a Material World’