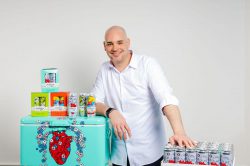 Nicolas Duvernois’s entrepreneurial journey has got to be one of the most inspiring contemporary Canadian success stories. After struggling to pay rent and working as a janitor in a Montreal hospital for 12 years, he decided to start his own business, eventually launching one of the world’s best vodka brands.

Duvernois is the president of Duvernois Creative Spirits, the Montreal-based company behind Pur Vodka, Romeo’s Gin and Choco Crème. His spirit empire began in 2010 with Pur Vodka when the drink was awarded before selling its first bottle. With over 80 prestigious medals, it sits among the most awarded premium vodkas and has been named the world’s best vodka six times.

The founder first embarked on his entrepreneurial journey after graduating from the University of Montreal in political science. In 2006, he opened a restaurant that closed nearly a month later. Despite his first business experience failing, this was when he fell in love with entrepreneurship and discovered the popularity of vodka.

Considering that freshwater covers a tenth of Quebec’s territory, he was shocked when he found out that there was no Quebec-based producer of the globe’s most popular alcohol.

“It’s exactly at that moment that I thought, ‘I’m going to be the first one,’” he said.

After four years of days spent working at the Ste-Justine Hospital followed by long nights of research into the alcohol industry, Duvernois came to the idea of redefining how North Americans consume vodka.

“I was able to make it into the industry because I quickly realized that all vodkas were about cocktails,” he said. “It’s an excellent spirit that shouldn’t solely be made for mixing. That’s how I got the name, and that was my approach for the first couple of years.”

The Montrealer’s thirst for creativity and drive to diversify his products led to the launch of Romeo’s Gin in 2015. To “democratize the art,” each of the line’s editions is embellished with designs by urban artists. It is considered a leader in the gin category at the Société des alcools du Québec (SAQ), with sales exceeding CAD$21 million in the last year.

Earlier this year, the gin brand released a line of non-alcoholic, ready-to-drink cocktails to meet the growing consumer demand for low and non-alcoholic beverages, and to enter the grocery stores market.

This expansion follows Duvernois’ recent investment in the BockAle Microbrewery, which specializes in alcohol-free beer.

Duvernois Creative Spirits’ various products are sold across Quebec, Japan, France, Belgium, and Great Britain, and Duvernois said he is looking to enter the U.S. market in 2022.

While the range of Duvernois’ products helped the company to avoid severe impacts due to the COVID-19 pandemic, Duvernois said to have found it challenging to keep a healthy routine while working remotely.

“We lost on some products but gained on others,” he said. “On the spirit side, it was almost as if nothing changed. On the leadership side, it was pretty difficult because working from home is not my thing.”

The company launched MAINFORTE, a line of certified cleaning and disinfecting products that sold more than CAD$5 million worth of hand sanitizers, he said.

“You’re always under pressure when you’re an entrepreneur, but then it was a hospital calling, and they needed [products] for yesterday,” added Duvernois. “It was a lot of under pressure work, but I am super proud of what we’ve done.”

After conducting some serious research, he curated the tips and tricks he learned from experts to publish a practical guide in French for those who wish to successfully adapt to remote work.

His biggest takeaway? Learning how to self-manage.

“Leaders put so much emphasis and pressure on themselves to be good for the team, but often forget to be good for themselves as well,” he said. “You cannot be a leader if you don’t have a human approach. It’s not that we don’t expect everybody to work hard, but it’s about giving the tools, the lead, and the example of how we want to build that business.”

Stephanie Ricci contributed to this story.

Ukraine’s foreign minister says no fly-zone the ‘only rational decision,’ pleads with Biden to reconsider

The Oscars may be on ‘life support’ with floundering ratings: ‘Iceberg is in sight,’ expert says

You Should Be Watching ‘Our Flag Means Death,’ HBO’s New Most Popular Show

Notorious Colombian drug lord pleads not guilty after extradition to US