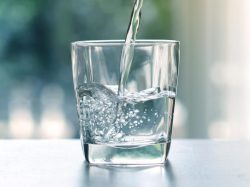 Normally, you shouldn’t find a glass tumbler in your urinary bladder. (Photo: Getty)

Oh, that’s where that glass tumbler went. A case report published in the journal Urology Case Reports described how doctors found a glass tumbler that a 45-year-old woman had misplaced about four years earlier. And urine for a surprise as to where they found this glass tumbler. Here’s a hint. It wasn’t in the woman’s cupboard.

When you need a doctor to find something that you’ve lost, chances are something’s gone quite wrong. After all, you don’t tend to call your doctor every time that you can’t find your Spider-Man underwear. In this case, the woman had been suffering urgenturia for about a year before eventually going to the emergency room. Now, urgenturia may sound like a cafeteria when you want food very quickly. But instead it is a feeling of urinary urgency, a continuing sensation of needing to empty your bladder. It’s called urgency because the words “I really have to pee” aren’t usually followed by “let’s take a leisurely stroll in the park” or “can you tell me that really long story about your thumbtack collection again?”

Urinary urgency is a common symptom of a urinary tract infection (UTI) because when your bladder walls get irritated they often begin to contract or spasm. The case report, authored by a team from the Academic Hospital Habib Bourguiba in Sfax, Tunisia (Ahmed Chaabouni, Ahmed Samet, Mohamed Fourati, Houcem Harbi, Mohamed Amine Mseddi, and Mourad Hadjslimene), indicated that the woman had received treatment for bladder infections several times previously. However, each time no one had taken a closer look at her bladder.

While the woman was in the emergency room, a urinalysis on a sample of her urine found both red blood cells and lots of white blood cells. This might have been expected for a typical UTI. However, an X-ray of her pelvic area revealed something even more unusual: an object that appeared shaped like a glass. And nothing in your pelvis should be shaped like a glass, regardless of what you may nickname your genitals.

The woman then underwent surgery to remove this object from her bladder. And the surgery revealed a glass more than half full situation. It was a glass tumbler that had apparently been sitting in her bladder for a while because it was encased in calcified material. The picture in the following tweet shows what doctors had extracted from her bladder:

All told, this combination glass tumbler and bladder stone measured 8 cm by 7 cm by 8 cm. That’s a fairly large stone as eight centimeters is about one-twentieth the height of Napoleon. With this glass tumbler successfully removed from her bladder, the woman was able to leave the hospital after two days and apparently had no problems afterwards.

Whenever you find a glass tumbler in someone’s bladder, you typically should have follow-up questions. After all, bar or kitchen items shouldn’t just randomly appear in one’s bladder. Upon questioning from the doctors, the patient mentioned that she had used the glass tumbler as a sex toy four years prior, inserting it into her vagina. Apparently, she hadn’t removed the glass tumbler from her vagina. Over time, this object probably caused inflammation and the breakdown of the tissue between her vagina and her bladder. The following diagram shows how your bladder sits in front of your vagina:

The bladder sites in front of the vagina. (Photo: Getty)

This tissue breakdown then may have allowed the glass tumbler to slowly migrate from her vagina into her bladder. When a tunnel forms between your bladder and your vagina, it’s called a vesicovaginal fistula. A fistula is any abnormal connection between two body parts. The prefix “vesico-” stands for something involving your bladder, and the suffix “vaginal” not surprisingly stands for something involving your vagina. That’s why you should avoid anything called vesico-pancakes.

In general, it’s a bad idea to put anything into your vagina that don’t belong in your vagina. Your vagina isn’t a suitcase or a treasure chest. Instead, it’s a much more complex body part that’s lined with acid-producing bacteria. These microbes help maintain specific conditions in your vagina such as a pH level that can range from 3.8 up to 5 depending on your age. Putting anything not designed to go in there could disrupt these conditions, leading to tissue damage, infection, or both. That’s why legitimate sex toys should be designed in a way that minimizes disruptions to your vagina.

Moreover, it’s a good idea to keep track of whatever you happen to put into your vagina. This doesn’t necessarily mean creating a spreadsheet along with graphs and pie charts. Or maintaining an accurate inventory of every single item in your house just to make sure nothing went into you without you knowing it. However, it does mean that your vagina should not be the same as Las Vegas. Whatever happens in there shouldn’t necessarily stay in there. Instead, make sure that you remove what’s been put in your vagina within a reasonable amount of time. And if you have to ask yourself, “who was the President when I put this in there,” you’ve probably waited too long.

Spring forward. Fall back. Will Senate vote get rid of that?

Supreme Court: Hawley spars with Jackson over child sex predator’s sentence: ‘Is he the victim here?’

Ukraine’s Drones Are Wreaking Havoc On The Russian Army

How ‘Babushka Z’ became the unlikely icon of Russian propaganda