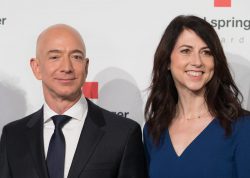 MacKenzie Scott, the ex-wife of Amazon founder Jeff Bezos, is giving away her $46 billion fortune faster than anyone in history. Less than two months into 2022, Scott isn’t showing any signs of slowing down.

Notably, Scott didn’t publicly announce these donations herself, as she has done in the past. In a December Medium post, Scott said she would not reveal the latest recipients of her donations, arguing that the media focuses too much on her and not on the groups she gives money to. Forbes takes the position that people with billions of dollars at their disposal warrant more scrutiny than average Americans because of the power that money wields. After calls for more transparency, in December Scott wrote that she hopes to launch a website with a searchable grants database this year.

Since divorcing Bezos in 2019, the 51-year-old Scott has emerged as one of the most secretive and prolific philanthropists in the world. Including February’s gifts, she has given away a total of $8.8 billion in less than two years to more than 780 organizations–more than four times what her ex-husband has donated so far in his lifetime, Forbes calculates. Scott’s gifts come in the form of unrestricted grants, meaning that nonprofits can spend the money however they want rather than on particular programs. Though this kind of giving isn’t new, Scott (and possibly Melinda French Gates) is putting a spotlight on trust-based philanthropy, which seeks to address the power imbalances between wealthy funders and nonprofits.

Editor’s note: Updated on Feb. 15, 2022 to include a donation to Leading Educators.

Editor’s Note: This article was updated on February 19, 2022 to include two additional donations, to Shatterproof and Young People in Recovery.

Editor’s note: Updated on Feb. 28, 2022 to include a donation to the Collaborative for Gender + Reproductive Equity

Domestic violence in France: When the perpetrator is a police officer

Lack Of Engagement By Remote Workers Can Lead To Their Early Termination: New Study

Dust storms sweep over Baghdad amid widespread desertification in Iraq

Soldiers celebrate Holi in Kashmir, while being away from homes