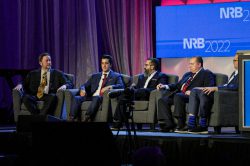 Four independent news organizations described how they counter suppression of information, war on religions, and censorship on social media platforms at a panel discussion held at the 2022 National Religious Broadcasters (NRB) convention.

“Their truth is truth by omission. …  They figured out: if we can just not report on it, we can pretend it doesn’t exist,” Boyce told the panel on March 9.

For example, the news about the recent findings by special counsel John Durham who is probing the origins of the FBI’s investigation into Donald Trump’s 2016 presidential campaign was hardly covered by the mainstream media, Boyce said.

Durham alleged in February that a tech executive aligned with the Democratic Party spied on former President Donald Trump’s residences and the White House when Trump was president.

Boyce cited Mark Levin, a Fox News host and a radio personality, who said that these findings are “the number one scandal in the history of this country.” However, except for two and a half minutes of mostly negative television coverage by CNN, mainstream media have not reported it, he said.

Mainstream media and social media also censor talk about the COVID-19 vaccine, voter fraud, and the 2020 election, Ruddy added. “There should be an outcry [but] there isn’t.”

“The mission of a journalist is actually very simple,” said Joshua Philipp, host of the Crossroads program on The Epoch Times.

“It’s to provide people with an accurate understanding of the world. That means you just give people the information, you give them the context to understand it,” Philipp explained The Epoch Times’ approach to news reporting.

“When you present truth and you just say this is what happened, it has an incredible power to dispel lies,” Philipp added.

Mainstream Media at War With Religions
The mainstream media is “at war with people of faith,” said the CEO of Newsmax. “This war has been going on for decades, but it’s really getting more and more momentum.”

Many people in America think that those who did not take the COVID-19 vaccine should be “locked up and imprisoned,” Ruddy said. “A lot of these come from very secular values, where they don’t respect religious faith. And at the end of the day, they’re not going to respect civil rights and civil liberties. And we’re seeing that. They don’t really believe in your right to free speech.”

The disappearance of free speech and free discussion is part of this secular war, Ruddy added.

Christopher Dolan, president and executive editor at The Washington Times, participates in a panel discussion at the NRB Christian Media Convention on March 9, 2022. (Crossroads/Screenshot via The Epoch Times)
Christopher Dolan, president and executive editor of The Washington Times, said that he does not think “there’s an effort to silence religious people.” He believes that “as a whole, it happens because of the people running these organizations.”

“The delineation between news and opinion was killed over the last 20 years,” he said.

In Philipp’s view, there is a war against faith going on in the media and in politics under the guise of political correctness.

The idea of political correctness originated in 1967 in communist China under Mao Zedong, Philipp said. “You are politically correct if what you’re saying aligns with what the party is doing. What the Communist Party was doing at the time was the Cultural Revolution, [which was about] killing: killing rightist, killing your landlords, persecuting teachers—that was politically correct in China in 1967.”

Now, political correctness in media and politics means that people are free to have their faith and to express it, Philipp explained, but if someone expresses values that go against the political interest, this person will be attacked.

Boyce believes that “most of the mainstream media are godless [and] they no longer value truth.”

Journalism used to be a noble profession and it still is, but the mainstream media do not practice journalism and no longer respect truth, Boyce said. This is “because they can’t manipulate you into believing something that’s not true unless they can convince you that it is not true,” he explained.

Silencing Independent Voices
Media that strive to report impartially face pressure and censorship exerted on them by Big Tech in the form of demonetization or blocking of their content.

The reach of Washington Times’ stories has been significantly reduced by Big Tech, said the company’s CEO.

The Times covered Hunter Biden’s laptop story that broke before the 2020 election and a story related to the false allegation that Russia colluded with Trump’s campaign, but these stories were blocked on social media, Dolan said.

“Our story is completely legitimate. It’s completely sourced back. It’s all backed up by the documents,” Dolan continued, but “our reach keeps getting smaller and smaller.”

The company has been losing advertising revenue as a result of its contents being blocked, Dolan said.

Newsmax’s CEO noticed that their breaking news stories that used to appear on the first page of the search results now appear further down, e.g. on the fourth page.

The same happens to other conservative media that have been de-ranked, de-listed, or depressed by Big Tech, Ruddy said. It cuts people’s ability to find a story and the number of people viewing it, he added.

“We’re all seeing this massive decline, and that affects our revenues. So we don’t have the ability to conduct journalism because we can’t pay the reporters. And they’re doing this against all the conservative media.”

Most of The Epoch Times’ channels on YouTube have also been censored and have been targeted by fact-checking warnings, Philipp said, adding that in some cases the fact-checkers turned out to be wrong themselves.

For example, YouTube censored The Epoch Times’ documentary on the origin of the CCP (Chinese Communist Party) virus, also known as the Wuhan coronavirus, but when it turned out that the fact-checker was wrong, Philipp said, the fact-checker neither backtracked its statement nor corrected it.

Solutions to Avoid Censorship
To avoid censorship, the American people have come up with a solution and started using Rumble, a platform that will not fall prey to cancel culture, Boyce said. As a result, Rumble has become much bigger now, he added.

“I think this kind of censorship is very dangerous, incredibly anti-free speech, and truly anti-progress of science, which involves skepticism and argumentation to arrive at the truth,” Paul said at that time in a statement.

“Newsmax, since the last election, [has] had close to 7 million downloads of our app, which is free. …  We’re just seeing millions and millions of people engage that way. And it’s been very powerful.”

The traditional business model used in the newspaper industry that relied on the daily delivery of printed copies of the paper to people’s doorstep has been lost, said the Washington Times’ president.

“News organizations are serialized coverage of events,” Dolan pointed out. What is known one day may be completely different from what will be reported a few days later or a week later because the situation evolves and changes, he said.

Dolan cited an example of The Washington Times’ story published in January 2020 about the Wuhan lab based on the information on record the Times obtained from its sources. It was not a big story but it was blocked on social media, he added.

We need to be a part of people’s daily routine and a part of their habit, Dolan said. “They may not need the information every day that’s there. But when things happen, they’re going to want to have a place to go and we’re there for you.”

Jack Phillips contributed to this report.

Ella Kietlinska is a reporter for The Epoch Times focusing on U.S. and world politics.

President Zelensky Is Not A Billionaire. So How Much Is He Worth?