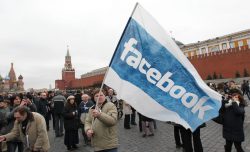 Anti-Putin opposition activists wave a flag as they attend an unsanctioned 2012 rally at Red Square … [+] on April 8, 2012, in Moscow.

Russia’s crackdown on Instagram and Facebook will produce a billion-dollar hit on their parent company’s revenue, an unexpected loss that will compound some concerns about Meta’s sales.

Russia accounts for 1.5% of Meta’s advertising dollars, chief financial officer Dave Wehner said Thursday at a Morgan Stanley conference. Last year, Meta pulled in $114.9 billion in sales—with Russia accounting for $1.7 billion, based on Wehner’s comments. That works out to about $4.7 million lost per day.

The Kremlin on Friday announced it would begin restricting Instagram three days from now, the latest escalation in a conflict between the Putin regime and Meta following Russia’s invasion of Ukraine. Russia also said it would officially categorize Meta as an “extremist organization.” This closely follows Meta’s decision to apply warning labels to Russian state media agencies on Instagram—as it had previously done on Facebook—and an additional move by the social network to allow some calls for violence against Russia to be published on its site, an unusual move by the company after several years of criticism over its handling of outrage speech. Russia has already blocked Facebook, and Meta said last week it would restrict Russian advertisers from buying ads on Facebook.

The lost revenue from Russia comes at a time when Meta is already contending with questions about how it will continue to expand revenue. Like other companies such as Google and Twitter, Facebook has been impacted by a change to Apple’s iPhone software last year, making it more difficult for these businesses to offer advertisers in-depth information about their users. Facebook had already warned investors that the Apple shift would produce a $10 billion reduction in revenue this year.

Facebook and Instagram were hugely popular in Russia, often some of the only portals to the West in a nation where information is tightly controlled by the government—a stranglehold only increasing during Russia’s war on Ukraine. Facebook had nearly 70 million users in Russia, and Instagram has around 63 million, according to Statista, a data tracking company. Instagram in particular had seen strong growth during the pandemic, increasing by 3 million users in that time.

While popular, Facebook and Instagram aren’t as widely used in Russia as YouTube, Russia-based social network VK and WhatsApp. WhatsApp, of course, is also owned by Meta and has close to 80 million users, according to Statista. Meta doesn’t monetize WhatsApp the same way as it does Instagram and Facebook, and, for now, WhatsApp remains available in Russia.

Is ‘Environmental Racism’ Real or Just Another Woke Trojan Horse?