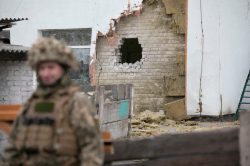 A Ukrainian soldier stands next to a damaged wall after the reported shelling of a kindergarten in … [+] the settlement of Stanytsia Luhanska, Ukraine, on February 17, 2022. – U.S. Defense Secretary Lloyd Austin warned on February 17, 2022, of a provocation by Moscow to justify military intervention in Ukraine after “disturbing” reports of mutual accusations of bombing between the Ukrainian military and pro-Russian separatists. (Photo by Aleksey Filippov / AFP) (Photo by ALEKSEY FILIPPOV/AFP via Getty Images)

A legal war between Ukraine and Russia is raging in international courts. Since 2014, Ukraine has had a robust and transparent lawfare strategy against Russia, complete with a national “Lawfare Project” website. In the past few days, it began fighting two new legal battles in the International Court of Justice and International Criminal Court. These lawsuits, on their own, are unlikely to halt the Russian invasion. Whether Ukraine wins or loses, these lawsuits will help Ukraine achieve strategic goals. Each lawsuit delegitimizes Russian President Vladimir Putin’s cause and adds weight to international efforts to sanction and punish Russia and Russian officials for their actions. In the long term, the cases could also result in monetary damages and convictions of war criminals.

Ukraine’s has requested provisional measures to halt the Russian invasion from the International Court of Justice, which handles disputes between states, ordinarily ones who have consented to the court’s jurisdiction. Since Russia is not a member of the ICJ, Ukraine has engaged in some creative lawyering to haul Russia into court.

Ukraine alleges that Russia violated the Convention on the Prevention and the Punishment of the Crime of Genocide (the “Genocide Convention”), to which both Ukraine and Russia are parties. The ICJ has jurisdiction over claims arising from the Genocide Convention. In recent days, Ukrainian President Volodymyr Zelenskyy has stated that Russia’s military actions “bear signs of genocide.” However, Ukraine’s filing before the court only briefly mentions this argument. Ukraine likely wished to preserve this argument if they are able to gather sufficient evidence—a laborious task—to substantiate such a claim at a later date. Instead, Ukraine primarily bases its application on a novel interpretation of the Genocide Convention.

The convention says that the ICJ shall hear disputes between contracting parties related to its “interpretation, application or fulfilment,” including those relating to a state’s responsibility for genocide. Ukraine claims that Russia is abusing the concept of genocide and undermining the Genocide Convention by basing its military actions on a false claim of genocide against Ukraine. Russia argues that it has the right to prevent and punish the alleged genocide by Ukraine of almost 4 million ethnic Russians in Donestk and Luhansk. Ukraine claims that Russia “degrades and defiles the object and purpose of the Genocide Convention” by basing its military actions on this rationale.

Ukraine asserts “its rights not to be subject to a false claim of genocide, and not to be subjected to another State’s military operations on its territory” based on abuse of the Genocide Convention. Ukraine asks the ICJ to order Russia to immediately cease its attacks on Ukraine until the court can decide on the case. The ICJ usually hears such applications for provisional measures in a matter of weeks.

DONETSK, UKRAINE – FEBRUARY 17: (——EDITORIAL USE ONLY â MANDATORY CREDIT – “UKRAINIAN CHIEF OF … [+] GENERAL STAFF / HANDOUT” – NO MARKETING NO ADVERTISING CAMPAIGNS – DISTRIBUTED AS A SERVICE TO CLIENTS——) A view from the shelled kindergarten in eastern Ukraine on February 17, 2022. (Photo by Ukrainian Chief of General Staff / Handout/Anadolu Agency via Getty Images)

Ukraine has also announced that it will seek an investigation of Russian officials by the prosecutor of the International Criminal Court for attacks on a kindergarten and orphanage. Unlike the ICJ, the ICC investigates and prosecutes individuals for alleged crimes. While Ukraine is not a member of the ICC, in 2015, it granted the ICC jurisdiction over war crimes, genocide, and crimes against humanity that are committed on its territory, retroactive to the time of Russia’s invasion and subsequent annexation of Crimea. Although Russia is not a member of the ICC, it can still investigate Russian officials for crimes committed on Ukraine’s soil.

Even before Ukraine announced that it would seek an investigation, ICC Prosecutor Karim Khan expressed concern for the development in Ukraine, and reports indicate that he will launch an investigation this week.

The courts will be unable to stop the Russian invasion. Even if it grants provisional measures, the ICJ does not have an enforcement mechanism to stop military conflict. The ICC has jurisdiction to arrest and try war criminals, but investigations take years or even decades. The availability of smartphones and technology that can help Ukrainians safely collect and preserve evidence to the standards of international courts may speed justice for Ukraine. Still, we are unlikely to see Putin stand trial in the ICC for many years.

Yet these lawsuits are likely to produce some short-term gains for Ukraine. Each legal success by Ukraine sets a legal standard that can serve as a basis for other actions, like sanctions. The threat or existence of an ICC investigation might deter Putin, or at least some of his forces, from being overly aggressive. The ICJ will not want to look weak in the face of Russia’s onslaught, and will likely find that Ukraine’s application is sufficient to grant provisional measures. Doing so would undermine Russia’s argument that its invasion is based on genocide. Every day that it continues to fight, Russia would also violate an international court order. Both courts could thus further undermine Russia’s legitimacy and give the international community more reason to endorse sanctions or punishments against Russia and Russian officials.

Ukraine’s long-term lawfare strategy may eventually pay off monetarily. The ICJ can award damages to Ukraine. Although Russia may not agree to pay them, the judgments could be enforced in jurisdictions where Russia has assets separate and apart from any diplomatically immune property. This could include property owned by Russian officials. The Ukrainian government could also pursue judgments against Russia in individual nations that have laws like the U.S. Global Magnitsky Act, which allows freezing assets of human rights abusers. The hidden assets of Russia and Russian officials would take time to uncover, but could significantly help fund post-conflict reconstruction.

Ukraine is showing itself to be a fearless legal warrior. Its latest salvo into the two most prominent international courts is already generating results and galvanizing international support.  Lithuania has called on the ICC to investigate war crimes by both Russian and Belarussian officials. A group representing more than a million lawyers in 45 European countries has called on the ICC prosecutor to investigate the case.

Whether Ukraine wins or loses the lawsuits, it has used them well to generate sympathy in the court of public opinion. Its long-term investment in lawfare may pay greater dividends.

Supreme Court: Hawley spars with Jackson over child sex predator’s sentence: ‘Is he the victim here?’

5 Amazing Tips on Turning Real Estate Into a Real Fortune

Looking for Love: The Greatest Gift We Can Give Another