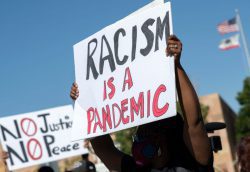 On May 5, Attorney General Merrick B. Garland launched the Office of Environmental Justice. He assured the people of America that the office “will serve as the central hub for our efforts to advance our comprehensive environmental justice enforcement strategy.”

Garland and his colleagues “will prioritize the cases that will have the greatest impact on the communities most overburdened by environmental harm.”

Some authors are concerned that the office won’t do enough to address the supposed scourge of environmental racism. Are their concerns warranted?

To some readers, I’m sure, environmental racism is an unfamiliar term.

What exactly is it?

To answer this question, let’s first talk about John Oliver, a British-born comedian who has amassed a cult-like following in his new home, the United States. An apprentice of Jon Stewart, another comedian who once had a cult-like following, Oliver has a unique style. For the uninitiated, Oliver focuses heavily on left-leaning topics. On his hit TV show, “Last Week with John Oliver,” he has dedicated entire episodes to issues like police brutality and systemic racism.

Oliver focused explicitly on environmental racism in a recent episode, which involves racially-motivated discrimination in environmental policymaking. Black Americans, warned Oliver, are exposed to 38 percent more polluted air than white Americans. This, he argued, has a lot to do with decades of redlining, a discriminatory practice of denying services (bank loans, accommodation, etc.) to residents of certain areas and/or people of certain races/ethnicities.

Now, although redlining has most definitely played a nasty role in U.S. history, the issue is not quite as black and white as Mr. Oliver portrayed.

Last year, the National Bureau of Economic Research published a paper challenging Oliver’s rather simplistic narrative. Although redlining did occur, the manner in which it occurred has been completely misunderstood. In short, the color-coded maps that dictated lending and investment behaviors had little impact on both private lenders and the Federal Housing Administration (FHA).

Commenting on the paper, Jake Blumgart noted that the Home Owners Loan Corporation (HOLC), a government-sponsored corporation responsible for drawing up those much-discussed maps, “actually loaned widely in Black neighborhoods and other red-shaded areas.” Meanwhile, private lenders and the FHA “clearly engaged in racist lending practices all on their own.”

The abovementioned lines deserve repeating. The findings of the paper were—and still are—rather important. As Price Fishback, a professor of economics at the University of Arizona told Blumgart: “People have been treating the HOLC like they’re evil or highly discriminatory,” but “the share of their loans that were held by Blacks is larger than the share of loans by any group of private lenders you can find during this time frame.”

HOLC “has this really bad reputation,” but it’s not deserved. As Fishback said, “They were actually doing more for Blacks than anybody else at the time.”

Now, of course, racism is real. However, as I said earlier, things are not entirely as black and white as Oliver and many other commentators have portrayed them. This brings us back to environmental racism.

Officials in Chelsea, Massachusetts, were left infuriated after a pile of asbestos-laden debris was dumped right beside a public housing complex; some advocates were quick to label it “environmental racism.”

On May 16-17, the Erb Memorial Union, the student union building of the University of Oregon, hosted a seminar on “environmental racism.” Not to be outdone, the Environmental Protection Agency (EPA) just released an equity action plan that will focus on blending environmental justice with matters of race and civil rights.

Is it possible that we’re addressing issues of injustice and inequality in a misguided manner?

After all, modern-day America is stratified into a number of social classes based on affluence, income, credentials, profession, and social networks—not necessarily race or ethnicity. Perhaps “environmental classism” would be a better term.

Why must we view everything through the lens of race?

The United States has come a long way since the days of Dr. Martin Luther King Jr. and the civil rights movement. The journey is not complete. Nevertheless, significant progress has been made. Poverty rates for black citizens and other minorities have reached historic lows.

I say this because white people can also suffer, contrary to popular belief. Some 40 million Americans live in poverty. Of the group, more than 43 percent are non-Hispanic whites.

When discussing injustice, let’s not omit white people from the conversation just because their skin happens to be a different color. That would be legitimately racist.

John Mac Ghlionn is a researcher and essayist. His work has been published by the New York Post, The Sydney Morning Herald, Newsweek, National Review, and The Spectator US, among others. He covers psychology and social relations, and has a keen interest in social dysfunction and media manipulation.

Spies not like us: American intelligence addresses lack of diversity

Ukraine today, Taiwan tomorrow? Tensions mount between US and China over Taiwan