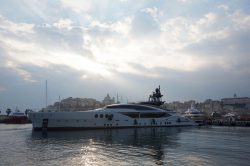 Authorities in Italy froze two yachts belonging to sanctioned Russian billionaires on Friday. Italian police froze the Lady M yacht—owned by steel magnate Alexey Mordashov—in the port of Imperia, according to a tweet posted on Saturday by Ferdinando Giugliano, the media advisor to Italian Prime Minister Mario Draghi. He also added that the country’s tax police froze the Lena yacht, owned by oil & gas mogul Gennady Timchenko, in the nearby port of Sanremo.

Alexey Mordashov’s Lady M yacht after being frozen by Italian authorities in Imperia on March 4, 2022.

Mordashov’s Lady M is registered in the Cayman Islands and has been in Imperia since January. According to data provided by yacht valuation experts VesselsValue, the vessel is worth $27 million, although the Italian government estimated its value at $71 million. At 213 feet, the yacht features a beauty salon, a current pool and a helicopter pad as well as six cabins with space for up to 12 guests. Mordashov also owns a much larger yacht, the 464-foot Nord, which is currently off the coast of the island of La Digue in the Seychelles. A representative for Mordashov did not immediately respond to a request for comment.

Gennady Timchenko’s Lena yacht after being frozen by Italian authorities in Sanremo on March 4, 2022.

Timchenko’s Lena is registered in the British Virgin Islands and has been in Sanremo for five months. It’s worth $8 million according to VesselsValue, while the Italian government valued it at $55 million. Built in 2010, the 126-foot vessel can house up to 10 people in five cabins. A representative for Timchenko did not immediately respond to a request for comment.

They’re not the only yachts owned by sanctioned Russian billionaires currently at risk of seizure. The 512-foot Dilbar, owned by early Facebook investor Alisher Usmanov, is currently stuck in the port of Hamburg, Germany, where it has been stationed since October for refitting. The nearly $600 million mega-yacht has not been seized, but cannot leave the country, according to officials at Hamburg’s Ministry for Economy and Innovation. Forbes had initially reported on Thursday that it had been seized and that work on the yacht at the yards of shipbuilder Blohm+Voss had stopped. Dilbar is registered in the Cayman Islands and owned through a Malta-based holding company, making it difficult for the German government to directly tie it to Usmanov for the purpose of sanctions enforcement.

Aluminum baron Viktor Vekselberg, who was sanctioned by the U.S. in 2018, owns a yacht that’s currently in Palma de Mallorca, Spain. The 255-foot Tango is registered in the Cook Islands and is valued at $90 million, according to VesselsValue. Unlike Mordashov, Timchenko and Usmanov, Vekselberg has not been sanctioned by the European Union, so it’s unclear if the yacht is at risk of seizure. A representative for Vekselberg did not immediately respond to a request for comment.

Follow Forbes’ reporting on all the yachts owned by Russian billionaires here:

MORE FROM FORBESBiden And Allies Are Coming For Russian Billionaires’ Yachts: Forbes Tracked Down 36. Here’s Where To Find ThemBy Giacomo Tognini

Chris Rock was ‘shaken’ by Will Smith incident backstage at Oscars: source