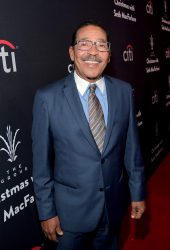 The order by Los Angeles Superior Court Judge Mary Strobel prevents Wesson, who was sworn in on Tuesday, from filling the seat until at least a March 17 preliminary injunction hearing, according to John Sweeney, attorney for the Southern Christian Leadership Conference of Southern California, which filed the lawsuit challenging the appointment and Ridley-Thomas’ suspension.

Sweeney said that during the March 17 hearing, the city will have to show why it believes it is legal for Wesson to fill Ridley-Thomas’ seat.

The lawsuit filed Friday by the SCLC of Southern California is aimed at reinstating Ridley-Thomas to the City Council. Ridley-Thomas, who was the executive director of the organization’s Greater Los Angeles chapter from 1981- 1991, was suspended from the council in October following the federal indictment.

The lawsuit alleges that “the decision to suspend [Ridley-Thomas] contravenes the bedrock presumption of innocence guaranteed under California law.”

It also seeks to prohibit the council from appointing Wesson or any temporary replacement to represent the 10th District.

The motion to appoint Wesson as a temporary replacement was passed by the City Council on Tuesday.

Wesson represented the 10th District from 2005 to December 2020. He also served as the president of the council from 2012 to 2020. The lawsuit notes that Wesson is “termed out” and alleges he cannot lawfully assume the City Council seat because he already represented the district for three terms.

According to the appointment, Wesson is supposed to hold the position through Dec. 31 unless Ridley-Thomas is acquitted or the charges against him are dropped.

“With over 30 years in public service representing the residents of Council District 10, there is no better choice at this time than former council member Herb Wesson,” Council President Nury Martinez said after announcing her motion to appoint Wesson last week.

“Mr. Wesson cares deeply about the communities he represents and knows the district better than anyone. The constituents of Council District 10 need a voting member who understands their community to represent them within Council Chambers.”

Since Ridley-Thomas’ suspension, the 10th District has been overseen by caretaker Karly Katona, who does not have voting authority. The City Council’s vote to suspend Ridley-Thomas passed with three council members in opposition: Councilmen Marqueece Harris-Dawson, Bonin and Curren Price. Price said before the vote that his office had been inundated with calls of support for Ridley-Thomas from South L.A. residents.

Responding to the judge’s issuance of a temporary restraining order blocking Wesson’s appointment, Ridley-Thomas attorney Michael Proctor said in a statement, “For months one of Mark Ridley-Thomas’ primary concerns has been that Nury Martinez and City Council have consistently taken action without listening to the voters of District 10. Today, thankfully, someone — the court system — finally listened to their concerns. The lesson to District 10 voters? If you want to be counted, you need to fight for it.”

The trial for Ridley-Thomas and former dean of the USC School of Social Work Marilyn Flynn is tentatively set to begin Aug. 9. The defendants are charged in a 20-count indictment alleging a secret deal whereby Ridley- Thomas — when he was a member of the county Board of Supervisors — agreed to steer county money to the university in return for admitting his son Sebastian Ridley-Thomas into graduate school with a full-tuition scholarship and a paid professorship.

Flynn allegedly arranged to funnel a $100,000 donation from Ridley- Thomas’ campaign funds through the university to a nonprofit to be operated by his son, a former member of the state Assembly. The donation prompted an investigation by the U.S. Attorney’s Office in Los Angeles that remains open, prosecutors said.

In exchange, the indictment contends, Ridley-Thomas supported county contracts involving the School of Social Work, including lucrative deals to provide services to the county Department of Children and Family Services and Probation Department, as well as an amendment to a contract with the Department of Mental Health that would bring the school millions of dollars in new revenue.

Both defendants have strongly denied any wrongdoing and promised that evidence will clear their names.

The SFPD Is Dying and No One Seems to Care

You’re Not Imagining It. Stores Are Locking Everything Up.