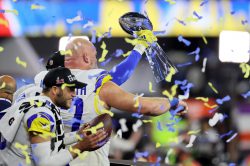 The Los Angeles Rams got their Hollywood ending.

With a fourth-quarter comeback, the Rams beat the Cincinnati Bengals, 23-20, at Super Bowl LVI on Sunday, claiming the franchise’s second Super Bowl championship—and first since returning to California from St. Louis in 2016.

“I dreamed this, man,” star defensive tackle Aaron Donald said on the field immediately after the game as the confetti fell around him. “It’s surreal. Look at this.”

Cooper Kupp, named the NFL’s offensive player of the year on Thursday, added a trophy to his case by picking up Super Bowl MVP honors. The 28-year-old receiver finished with eight catches for 92 yards and two touchdowns.

“I just don’t have words,” Kupp said from the on-field stage after the game, adding: “These guys that are standing out here, they challenged me, they pushed me, they made it so much fun to come to work every day. I’m just so thankful.”

The game looked like a mismatch. The Rams, despite being officially designated as the visiting team, were playing at their home field, SoFi Stadium, in Inglewood, California. It was their second Super Bowl appearance in four years, capping their fourth playoff appearance in five years. The Bengals hadn’t won a playoff game in 31 years.

And although the teams had similar player payrolls, the Rams had undeniable financial advantages, as the NFL’s fourth-most-valuable team, with Stan Kroenke, the world’s biggest sports mogul, as their owner. The Bengals, by contrast, are a family business, cofounded by legendary NFL coach Paul Brown and now controlled by his son Mike. The team ranks second to last in Forbes’ NFL team valuations.

Things certainly looked tipped the Rams’ way in the game’s early going. After a punt on their first drive, a 20-yard reception by Kupp set up a leaping touchdown catch by midseason signing Odell Beckham Jr. The pass came from another first-year Ram, quarterback Matthew Stafford, who had been acquired in a seismic off-season trade with the Detroit Lions.

Stafford, savoring his first long playoff run, showed veteran poise, completing his first six passes despite pressure from Trey Hendrickson and the Bengals’ defensive line. Early in the second quarter, he found Beckham for a 35-yard gain and then connected with a wide-open Kupp in the back right corner of the end zone for a 13-3 lead.

But there were warning signs. Johnny Hekker lost his grip on the hold for the point-after attempt following that score, costing the Rams a point, and Los Angeles’ defense, sticking with a four-man rush to avoid having to go into man coverage against Cincinnati’s talented receiving group, struggled to put pressure on second-year Bengals quarterback Joe Burrow. Cincinnati running back Joe Mixon also started to find his rhythm in the second quarter, even throwing a touchdown pass to wide receiver Tee Higgins on a trick play that narrowed the gap to 13-10.

Then Beckham appeared to twist his knee on a pass from Stafford, and went on to miss the rest of the game. That further depleted the Rams’ receiving corps—which had lost Robert Woods to an ACL tear in November and Tyler Higbee to a knee injury he sustained in the NFC championship game two weeks ago—and allowed the Bengals’ secondary to double-team Kupp. Los Angeles’ running backs couldn’t get anything going, either. The momentum quickly shifted to Cincinnati.

Cooper Kupp was overcome with emotion after the Los Angeles Rams defeated the Cincinnati Bengals in Super Bowl LVI.

Stafford, who had thrown a league-worst 17 interceptions in the regular season, was picked off on a deep throw to the end zone late in the second quarter and then again on a pass tipped by his receiver Ben Skowronek early in the third. Meanwhile, star Rams cornerback Jalen Ramsey slipped as he jostled with Bengals rookie receiver Ja’Marr Chase, who waltzed into the end zone for a 75-yard touchdown and a 17-13 lead on the first offensive play of the second half.

With the Rams trailing by 20-16 late in the third quarter, they suffered a big scare when Stafford was sacked on a third down and limped off the field, hopping up on a trainer’s table for an examination. He was able to come back in for the next series, but the Rams’ offense continued to stall out.

From there, the game turned into a grind. Donald and Von Miller, the MVP of the 2016 Super Bowl and another midseason Rams acquisition, dialed up the pressure on Burrow, taking advantage of a Bengals line that had looked overmatched for most of the season.

With few other options to turn to and time dwindling, Stafford began to force the ball to Kupp, marching the Rams down the field and picking up a key first down deep in Bengals territory on a defensive holding call. On the next play, a touchdown grab by Kupp was nullified by a pair of offsetting penalties, and the following play featured yet another defensive flag—uncharacteristic for a matchup between the two teams that had the fewest penalty yards in the regular season.

But given another shot, Stafford found—who else?—Kupp for a score that put the Rams up, 23-20.

Burrow connected with the dynamic Chase for a quick first down, ratcheting up the pressure, but on a fourth-and-1 at midfield, Burrow’s pass fell incomplete. Stafford was able to kneel to run out the clock, and the Rams could finally exhale.

The New Balance of Power: Its Risks and Opportunities

Newt Gingrich: No administration in modern history more out of touch with reality than Biden’s

Ukraine Is Doubling Its Army, While Russia Scrapes The Barrel For Reinforcements