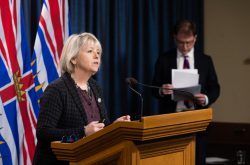 Just prior to B.C. scrapping plans to mandate COVID-19 vaccination for all regulated health professionals, a group of psychologists had pushed back against the policy. Shortly before that, regional health officials also pointed to evidence that vaccine mandates do not reduce transmission of the virus.

On March 10, Provincial Health Officer Dr. Bonnie Henry said the province was officially backing away from a plan originally announced in October to make vaccination a condition of licensing for everyone from dentists to dietitians.

Under the order, all private sector health care workers would have been required to have at least one dose of vaccine by March 24.

The change in policy came days after lawyers representing a “large group of B.C. psychologists” sent a letter to the office of Attorney General David Eby warning that an industry-wide vaccine mandate would have a harmful effect on staff, patients, and the general public.

“Thousands of patients will be left without a psychologist at a time when we are in the middle of a mental health crisis in B.C.,” the lawyers wrote.

In the nine-page letter, Kelowna-based Doak Shirreff Lawyers cited scientific data from around the world that COVID-19 vaccines do not prevent infection or transmission of the virus.

If the B.C. government intended to proceed with the expanded vaccine mandates, the attorneys said their clients would appreciate receiving the science and information that officials are relying on to justify their decision.

On Feb. 16, officials from Vancouver Coastal Health (VCH) highlighted evidence that COVID-19 can be spread in both the vaccinated and unvaccinated in a letter to the University of British Columbia. The officials cited current B.C. data while urging the university to drop its plan to de-register students who did not declare their COVID-19 vaccination status or comply with mandatory testing.

While Henry did not attribute the concerns raised by the psychologists’ lawyers or VCH officials as a reason for dropping the vaccine mandate, she did mention “ongoing consultation” with the province’s 18 health professional colleges.

She provided little explanation for the dramatically different approach, saying it was mainly based on decreases in cases and hospitalizations.

“We’re taking a more nuanced, risk-based approach,” she told reporters. “For some, that will mean that you must be vaccinated to practice in certain settings, but we’re doing that on a more tailored basis to each of the regulated health professions.”

Henry posted a new order on March 7 that requires all private health-care workers to submit their vaccination status to the colleges by March 31.

Under the new plan, patients will have access to information about their providers’ vaccine status—allowing them to decide whether to take their business elsewhere. However, officials have not provided any details on how that system will work.

B.C.’s Ministry of Health told The Epoch Times that the order is designed to ensure the safety of patients and health-care workers. But it did not specify how vaccination status will be disclosed to patients, how the order will be enforced, or what penalties will be handed out for non-compliance.

“The ministry continues to work closely with the colleges to determine how to address health professionals who don’t comply with the order,” the ministry said in an email.

While the latest order states that it is designed to help prevent or reduce the risk of the transmission and infection of COVID-19 by health professionals, the ministry did not answer requests to provide scientific evidence to support that claim.

No Scientific Rationale: Lancet Study
In their letter, the lawyers representing the psychologists cited a recent study published in The Lancet. The paper showed that the impact of vaccination on community transmission of circulating variants of COVID-19 “appeared to be not significantly different from the impact among unvaccinated people.”

The study concluded that there is no scientific rationale for policymakers to enforce mandatory vaccination on the premise that it prevents transmission, or to assert the widely made claim that this is a “pandemic of the unvaccinated.”

At a Feb. 9 press conference, Henry was asked if there was any scientific evidence behind keeping the B.C. vaccine card, which was first mandated in non-essential indoor venues like restaurants and gyms in September 2021. The reporter noted that the Omicron variant of the virus was being spread by both the vaccinated and unvaccinated.

She said the first reason is that the B.C. vaccine card acts as an incentive to encourage people to get vaccinated, which she added will decrease severe illness and hospitalizations.

Henry then noted that in the mandated indoor settings, the virus has been shown to spread more rapidly, but there is less transmission among the vaccinated. However, she provided a sports analogy rather than specific scientific evidence to support her claim.

“The difference in spread between somebody who’s vaccinated and unvaccinated it’s like … saying Christine Sinclair and I both play soccer. There’s a qualitative difference to that, and one of us may be more likely to score a goal than than the other,” she told reporters.

On March 10, Henry unveiled a plan to roll back COVID-19 restrictions in the province, including dropping the B.C. vaccine card on April 8. She said the changes were based on lower rates of transmission, fewer hospitalizations, and high rates of vaccination.

The move came after many Western countries and Canadian provinces—including Alberta, Saskatchewan, Manitoba, Ontario, Quebec, Prince Edward Island, New Brunswick, and Nova Scotia—already started to remove vaccine mandates or announced that they would be doing so shortly.

With the province still requiring all registered health-care workers to report their vaccination status to their colleges, a reporter asked Henry if she had considered the contents of the letter from VCH officials to UBC.

In the letter, which was co-signed by VCH’s chief medical health officer Dr. Patricia Daly and three other medical officers, the authors referred to a study posted on the Social Science Research Network website on Feb. 1.

The pre-print paper, written by public health and infectious disease experts from Canada, the United States, and the United Kingdom, concludes that vaccine mandates may cause unintended harms to society, including discouraging people from following public health measures in the future.

While Henry said she thinks the paper was a “a slightly biased opinion piece,” she added that it made very important considerations.

‘You’re Going to Get Resistance’
On Feb. 28, UBC officials quietly announced that the university will no longer require regular rapid testing or vaccine declarations for faculty and students.

An email signed by UBC President Santa Ono cited the scientific claims made by VCH officials that vaccine mandates do not slow the spread of COVID-19.

Stephen Hoption Cann, a clinical professor and epidemiologist with UBC’s School of Public and Population Health, says it’s natural for the public to grow weary and push back on policymakers trying to impose restrictions after two years of the pandemic.

Hoption Cann noted it’s been difficult for health policymakers to make their decisions with new data rolling in daily on COVID-19. He added that he’s unaware of any specific data that the B.C. government based their decision to continue requiring all private health-care workers report their vaccination status to their colleges.

The epidemiologist said the mRNA COVID-19 vaccines are a fairly new type of vaccine, so scientists are still learning about their durability to protect against new variants of the virus.

He added there’s other vaccines coming out that don’t depend on mRNA technology, that could be more effective at reducing transmission.

On March 10, Henry said the province’s first shipments of the protein subunit vaccine Novavax, which was considered a potentially appealing option for some health workers who wanted to avoid mRNA vaccines, have been delayed until the end of March.

COVID-19 vaccination has been required since October for health-care workers employed in hospitals, long-term care homes, and community health centres.

Jared Gnam is a reporter based in Vancouver.

Paris schools prepare to take in refugee children from Ukraine