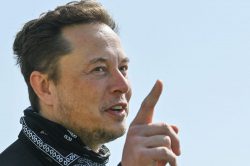 “You, little devil, are still young,” the head of Russia’s space program said in response to Musk’s … [+] challenge.

“I hereby challenge Vladimir Putin to single combat,” and the “stakes are Ukraine,” Musk said in a Twitter post Monday morning, using the Russian alphabet to write Putin’s name while writing Ukraine in the country’s own language.

In a follow-up message in Russian, Musk tagged the Kremlin’s official Twitter account and asked, “Do you agree to this fight?”

Dmitry Rogozin, director general of Russia’s space program Roscosmos, replied to Musk with a verse from Alexander Pushkin’s “The Tale of the Priest and of His Workman Balda.”

“You, little devil, are still young,” Rogozin said, quoting Pushkin’s folktale, and adding, “You are weak to compete with me; it would only be a waste of time. Overtake my brother first.”

Musk, for his part, reiterated that he is “absolutely serious” about the offer, and when asked if he would be surprised if Putin accepted the challenge, Musk insisted it “would be an honor.”

Crucial Quote:
“If Putin could so easily humiliate the west, then he would accept the challenge,” Musk wrote in another response on Twitter. “But he will not.”

Surprising Fact:
Ukraine’s vice prime minister and head of digital transformation, Mykhailo Fedorov, also weighed in on Elon’s challenge: “I am sure that @elonmusk can send Putin to Jupiter.”

Key Background:
This is not the first time that Musk, who is known for his sometimes erratic posts on social media, has commented on the war between Russia and Ukraine. The billionaire has previously mocked Russian officials on social media, most recently in response to Russia cutting the United States off from access to its rockets, with Musk joking that SpaceX rockets would instead be carried by “American broomsticks.” With Ukraine’s government calling for support from big companies around the world and asking them to take action against Russia, Musk was also one of the billionaires who offered assistance. In late February, the Tesla and SpaceX founder agreed to provide Starlink satellite internet dishes to Ukraine, offering the service for free and allowing citizens to stay connected despite the heavy fighting going on across the country.

Big Number: $219.1 Billion
That’s how much Elon Musk is worth, according to Forbes’ calculations. He is the richest person in the world with a net worth of $219.1 billion—nearly $50 billion more than the world’s second richest person, Amazon CEO Jeff Bezos.

Independent Journalism Is Solution to Media War on Religions and Censorship: Independent Media

Major Cryptocurrencies—Including Bitcoin, Ether—Rise Amid Fears Russia Will Use Them To Evade Sanctions

In Night Raid, Choppers Blow Up Fuel Depot On Russian Soil Near Ukraine