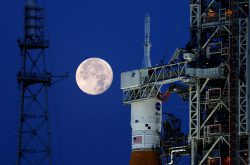 With repairs complete and the rocket in place at its designated launch pad, NASA is ready to once again attempt a critical fueling test of its next-generation Space Launch System. Per Space.com, the Artemis 1 “wet dress rehearsal” will begin at 5PM ET today with a call to stations for ground personnel at Kennedy Space Center.

Over the next 48 hours, technicians will attempt loading the rocket’s first and second stages with cryogenic fuel. Provided there aren’t major setbacks, they will then try to load it with propellant starting Monday morning. If the test is successful, the Artemis 1 mission could get underway as early as July 26th.

For the oft-delayed SLS, this is its second trip to historic Launch Pad 39B. Following an initial attempt at the wet dress rehearsal on April 1st, NASA tried to complete a modified version of the fueling test on April 14th, but that was cut short after the agency discovered a hydrogen leak in the rocket’s mobile launch tower. NASA eventually decided to move the SLS back to the Kennedy Space Center’s Vehicle Assembly Building for repairs and to give a critical nitrogen supplier time to complete capacity upgrades.

Once the wet dress rehearsal is complete, NASA can finally move forward with Artemis 1. The mission will send an unmanned Orion capsule on a flight around the Moon. The next two Artemis missions would feature human astronauts, with an eye toward a lunar landing sometime in 2025 or 2026.

The future of the creator economy in a Web3 world

Volkswagen presents a cross between an ID. Buzz and a pickup truck as a new concept vehicle

Rocket Report: A Minotaur explodes after launch; Starship rolls to the pad

Twitter deal leaves Elon Musk with no easy way out