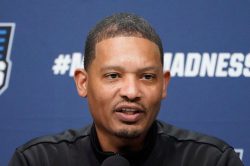 South Carolina is going to Paris.

The SEC school has hired ex-Chattanooga coach Lamont Paris to a five-year deal to replace Frank Martin, who was fired March 14 after 10 seasons. The news was first reported by ESPN’s Pete Thamel.

Paris, 47, becomes the first African-American head coach in the history of the Gamecocks’ program. He met with South Carolina officials on Sunday at the school and was offered the job Monday.

In four seasons at Chattanooga, Paris went 87-71, including a 27-8 record this season when the Mocs went 14–4 in SoCon play to win the regular season and tournament championships. They lost to Illinois, 54-53, in the first round of the NCAA Tournament on Friday.

Paris is one of several head coaches to leverage an appearance in this season’s NCAA Tournament.

LSU on Monday hired ex-Murray State coach Matt McMahon after Murray State lost in the second round to Saint Peter’s and Shaheen Holloway (who has been heavily linked to the Seton Hall job, which officially came open Monday when Kevin Willard took over at Maryland with a seven-year, $29.4 million deal.)

Florida hired San Francisco’s Todd Golden to replace Mike White, who took the Georgia job, and Mississippi State brought aboard New Mexico State’s Chris Jans. Golden and Jans also got a bump from leading their teams to the NCAA Tournament.

What Is an RMD and How Will It Help You Retire?