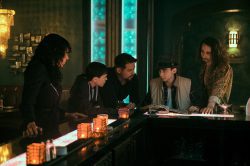 A busy month continues for Netflix as a major original series returns during the week of June 19th. This Wednesday, The Umbrella Academy is back for its third season. The comic book show has become a hit for Netflix as Marvel and DC properties have left for other platforms. This week also sees the arrival of Korea’s take on Money Heist.

Scroll on to see everything coming and going on Netflix for the week of June 19th.

This documentary follows maverick civil rights lawyer Ben Crump as he goes to trial to seek justice for the deaths of George Floyd and Breonna Taylor.

On the heels of bankruptcy, an ad businessman falls for a singer at a yoga retreat and joins her on a journey of self-realization.

All That: Seasons 2-3
The Future Of — NETFLIX DOCUMENTARY

With the help of industry experts, this innovative docuseries examine new and emerging technological trends to imagine revolutionary possibilities.

Bow wows and purr-fect pets! Meet amazing creatures from around the world and dig into the latest science on our animal friends’ senses and skills.

Lina makes a promise to her sick mother that she’ll spend the summer before college in Rome, where she falls for the city, the people — and the gelato.

This new reality show takes a bunch of clueless “kidults” who aren’t yet living to their full potential and puts them through their paces at a wilderness survival retreat to try and kickstart them into standing on their own two feet. The back-to-basics camp is a rude awakening to just how pampered their lives have been so far. At stake is a transformative cash prize for the lucky winner. There’s no running water, no parents to wait on them, and, worst of all, no Wi-Fi. But, by connecting to nature, they’ll learn to graduate as fully-functioning adults.

After putting a stop to 1963’s doomsday, the Umbrella Academy return home to the present, convinced they prevented the initial apocalypse and fixed this godforsaken timeline once and for all. But after a brief moment of celebration, they realize things aren’t exactly (okay, not at all) how they left them. Enter the Sparrow Academy. Smart, stylish, and about as warm as a sea of icebergs, the Sparrows immediately clash with the Umbrellas in a violent face-off that turns out to be the least of everyone’s concerns. Navigating challenges, losses, and surprises of their own – and dealing with an unidentified destructive entity wreaking havoc in the Universe (something they may have caused) — now all they need to do is convince Dad’s new and possibly better family to help them put right what their arrival made wrong. Will they find a way back to their pre-apocalyptic lives? Or is this new world about to reveal more than just a hiccup in the timeline?

Step into the lives of a group of wealthy friends from Barcelona who share a love of over-the-top fashion, luxurious parties and exclusive events.

After a 50 year absence, a renowned Parisian tailor and drag queen returns to his hometown in Poland to make amends with his daughter.

French rappers freestyle, battle and write their way to a game-changing 100,000 euro prize in a music competition series judged by Niska, Shay and SCH.

Sparks and feathers fly when a teenage Red, Chuck, Bomb and Stella spend a wild summer together with other Angry Birds at Camp Splinterwood!

A case of mistaken identity arises after a screw-up sales consultant and the world’s deadliest assassin – known only as The Man from Toronto – run into each other at a holiday rental.

British comedian Rowan Atkinson (“Mr. Bean”) stars in this almost silent comedy about a house sitter’s war with a bee.

Thieves overtake the mint of a unified Korea. With hostages trapped inside, the police must stop them — as well as the shadowy mastermind behind it all.

Those are all of the Netflix releases and departures for the week of June 19th. We will be back next week with more new movies, TV shows, and specials coming to the streaming service. In the meantime, check out everything else coming and going on Netflix.

Jacob started covering video games and technology in college as a hobby, but it quickly became clear to him that this was what he wanted to do for a living. He currently resides in New York writing for BGR. His previously published work can be found on TechHive, VentureBeat and Game Rant.

Netflix movies, shows, & series: New releases for the week of May 22nd

Could Apple’s rumored HomePod actually be a tiny Studio Display?

How to Help Convince Tech Companies to Make a Smaller Smartphone

People Think Minority Groups Are Bigger Than They Really Are