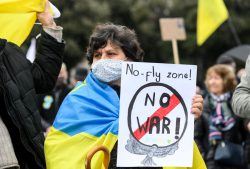 A no-fly zone “would not help” to defend Ukraine, the head of the UK’s armed forces has said.

Chief of the Defence Staff Admiral Sir Tony Radakin said the invasion in Ukraine “is not going well” for the Kremlin, with Russia’s military might not proving as strong as expected in the face of the Ukrainian resistance.

However, he said the key call of Kyiv—a no-fly zone—would not help those on the ground.

On Sunday, Ukrainian newspaper The Kyiv Independent reported the country’s President Volodymyr Zelensky had reiterated his demand as he said: “The world has the power to close our skies for Russian rockets and aircraft.”

“The no-fly zone would not help.

“If we were to police a no-fly zone, it means that we probably have to take out Russian defence systems and we would have NATO aircraft in the air alongside Russian aircraft, and then the potential of shooting them down and then that leads to an escalation.”

The view was echoed by Deputy Prime Minister Dominic Raab, who said it would be “very difficult, very challenging”, but added “we will do everything short of that to support Ukrainians”.

“We’re not going to get ourselves into a direct military conflict with Putin because that would be a massive escalation, but also that feeds Putin’s narrative,” he told Trevor Phillips On Sunday on Sky News.

“Putin wants to say that he’s actually in a struggle with the West—he’s not.”

Labour’s shadow defence secretary John Healey also said the implementation of a no-fly zone would give the Russian president a “get-out-of-jail-free card”.

Labour leader Sir Keir Starmer told ITV News: “Everybody understands why we can’t have a no-fly zone, why direct military assistance is not possible. That means sanctions have to be the strongest we have ever seen, the most effective we’ve ever seen.”

Ukrainian leaders have repeatedly called for a no-fly zone but Vladimir Putin warned that imposing one would be considered “participation in the armed conflict”.

NATO has ruled it out as the alliance fears it would spark a wider conflict.

General Philip Breedlove, a former NATO Supreme Allied Commander Europe, told Times Radio allies should enforce a humanitarian no-fly zone, with different rules of engagement than a military one “whereby we talk to our enemy, and we say, we are not going to fire on you unless you fire on us”.

But Raab said he did not think Putin would agree to such a move.

He told Times Radio: “I think it’s interesting, I just can’t see why Russia would agree to that and what we’ve been clear on is we’re not going to get into direct military conflict between the UK or NATO and Russia.”

He added: “We’ve had ongoing discussions with all of our allies and, indeed, with the Russians, and if we thought that there was an easier or credible route to provide that humanitarian support, of course, we’d want to look at it more seriously.”

Flight from Kyiv: ‘I need to believe I’ll come back’

US Lags on Delivery of Arms Promised for Taiwan’s Defense, Lawmaker Says

Shen Yun Reminds Us ‘We Are Spiritual Beings, Even If We Live in a Material World’