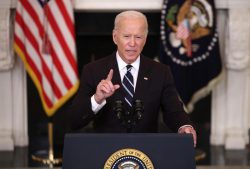 No Pipes For All: Reports about how the Biden Administration is giving away crack pipes to people with substance use disorder are not true.

Earlier this week, a social media firestorm broke out after the Washington Free Beacon inaccurately reported that the Biden Administration was funding a $30 million program to give crack pipes to people addicted to illicit drugs.

What is true is that the Substance Abuse and Mental Health Services Administration, a branch of the Department of Health and Human Services, will be funding 25 nonprofits that applied for a piece of a $30 million grant program focused on drug harm reduction measures. The approved measures, meaning programs and services the government is willing to pay for, include fentanyl testing strips, opioid overdose reversal medication naloxone, clean syringes, HIV testing kits, hepatitis A and B vaccines and other services. Safe smoking kits are also one of the approved services, but the government is only willing to pay for kits that include rubber mouth pieces, alcohol wipes, filters—but not pipes.

The false narrative that the Washington Free Beacon published, which was seized upon by Fox News and dutifully parroted by Republican politicians and commentators, is “misleading and misinformed,” a spokesperson for HHS told Forbes.

“No federal funding will be used directly or through subsequent reimbursement of grantees to put pipes in safe smoking kits,” Becerra and Gupta said. “The goal of harm reduction is to save lives. We will continue working to address the addiction and overdose epidemic and ensure that our resources are used in the smartest and most efficient manner.”

“I know this sounds insane; I know it sounds too crazy to be true; they call them smoking kits and they say it’s about [racial] equity, but they’re going to be mailing and sending pipes that can be used to smoke crack and meth to underserved communities in America,” said Rubio.

Also adding fuel to the issue is the fact that President Biden’s son Hunter struggled with substance abuse, including crack cocaine, for years.

During a press briefing at the White House, Jen Psaki dismissed the “inaccurate reporting.” A reporter asked what she would say to critics who suggest the Biden Administration is encouraging illegal drug use.

“I think that it’s important to step back and remember—just to put a little more of a fine point on it—that we are losing an American life every five minutes to overdose,” Psaki said. “We don’t have time for political games.”

What’s important to know is that America has been dealing with an accelerating epidemic of fatal drug overdoses that has gotten worse every year. From April 2020 to April 2021, a record 100,000 Americans died from drug overdoses, according to the Centers for Disease Control and Prevention, almost a 30% increase from the year before. The majority of fatal overdoses in the U.S. are caused by the extremely potent synthetic opioid fentanyl. According to a Forbes estimate, the total economic burden to society of America’s opioid overdose epidemic is now more than $1.3 trillion—and rising.

Harm reduction measures might seem radical and can certainly be misunderstood as being lenient on lawbreakers, but addiction is a disease, and diseases need to be treated with evidence-based interventions, therapies and medicines.

Sheila Vakharia, a deputy director at the Drug Policy Alliance, says her group helped lobby the government to dedicate $30 million of SAMHSA’s budget for harm reduction grants, marking the first time in history the government earmarked money for this type of service. She says the government first agreed that grant recipients could use federal funds to include pipes in smoking kits, but did an about-face after the controversy.

For people who don’t understand why harm reduction measures, including needle and pipe exchanges, are a good idea, Vakharia says it’s very simple. Twenty years into this overdose crisis, more than a million Americans have died: You can’t force people to stop using drugs, but you can help them make safer decisions that can positively affect a community.

“Syringe service programs and harm reduction programs, where pipes and other kinds of things are distributed, are really a great place to attract our most marginalized and high-risk users out of the shadows, and it brings them to services,” says Vakharia.

Once people enter these programs they are more likely to seek medical help, access drug treatment services and get tested for HIV and other diseases, she says.

At OnPointNYC, the nation’s first and only sanctioned overdose prevention center, which has locations in East Harlem and Washington Heights, executive director Sam Rivera says he can show people who don’t believe the science and data behind harm reduction measures exactly how many lives have been saved at his two clinics.

Since the two sites opened on November 30, 2021, 134 people have been revived from what would’ve been fatal overdoses.

When asked what he would say to convince naysayers like Sen. Rubio that harm reduction measures should be embraced, he is blunt:

“Unless you’re willing to lose another 100,000 Americans, then it doesn’t make sense to us,” Rivera says. “This is about saving Americans, people we value. These services are crucial.”

Victoria Rolls out Vouchers to Speed up Post-Omicron Economic Recovery