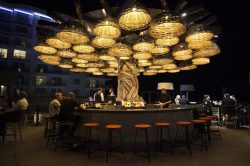 Some Orange County cities are reporting higher than expected tax revenue from hotels this year, following an increase in visitors as pandemic restrictions ease.

During a March 8 Costa Mesa City Council meeting, Finance Director Carol Molina said that the city is on track to receive $1.1 million more in hotel tax revenue than last June’s projection for the 2021–2022 fiscal year.

The city previously expected to receive $5.6 million in transient occupancy tax—or hotel tax—which is now projected to be $6.7 million.

While the number of visitors and tax revenue increased, the city won’t see a full recovery from the COVID-19 pandemic yet, Molina said.

“[While] higher than we had anticipated … this revenue stream is just not yet back to pre-pandemic levels,” she said. “The city’s prior pandemic amounts hovered around 8 to 8.5 million dollars a year, so we’re not quite there yet.”

Other Orange County cities are seeing growth in hotel tax revenues as well.

Newport Beach had originally adopted a budget expecting $19 million in transient occupancy tax revenues, which is now projected to be $25.6 million, a 34 percent increase.

Huntington Beach expected $10.7 million in hotel tax revenues for the 2021–2022 fiscal year, a stark increase from the $6.8 million in the previous year. The city has not released an adjusted projection as the current fiscal year is coming to an end in a few months.

Laguna Beach, similar to Huntington, has not released its adjusted projected hotel tax revenue for the 2021–2022 fiscal year. However, the original projection—$7.3 million—was a $3 million increase from the previous year’s $4.6 million.

Drew Van Voorhis is a California-based daily news reporter for The Epoch Times. He has been a journalist for four years, during which time he has broken several viral national news stories and has been interviewed for his work on both radio and internet shows.

State Government Can Remove Child From Parents Based on Presumption: Idaho State Representative

Russia Bans Facebook, Charging It With Discriminating Against Russian Media