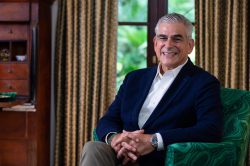 Jaime Augusto Zobel de Ayala is the chairman of his family’s Ayala Corp.

Ayala Corp.—controlled by billionaire Jaime Zobel de Ayala—aims to raise 52.5 billion pesos ($1 billion) by divesting some of its non-core asset divestments, beginning with a toll road south of Manila that it’s selling to the country’s second-richest person, Manuel Villar.

According to a filing to the Philippine Stock Exchange on Friday, Ayala Corp. has signed an investment agreement with Prime Asset Ventures of the Villar Group to take over its 100% ownership stake in the Muntinlupa-Cavite Expressway (MCX) for 3.8 billion pesos ($72.5 million). The deal will be subject to the approval of the Department of Public Works and Highways.

Ayala Corp. is currently selling its non-core assets to focus on the expansion of its core business in real estate, banking, telecommunications and power, while also developing its new business units in healthcare and logistics.

Manuel Villar gestures as he speaks to business leaders at a Makati Business Club forum in Manila.

Ayala was ranked No. 5 on last year’s list of the Philippines’ 50 Richest, with a net worth of $3.3 billion. He retired in 2006, and his eldest son Jaime Augusto Zobel de Ayala, who had been the CEO of Ayala Corp. since 1994, succeeded him as chairman. Last year, Fernando took over as CEO, while his elder brother Jaime Augusto continues to serve as chairman.

Ayala Corporation’s net profit soared 62% to 27.8 billion pesos in 2021, thanks partly to the improved performance of Ayala Land and Bank of the Philippine Islands (BPI) as well as exceptional gains from the partial sale of utility Manila Water to billionaire Enrique Razon, Jr.’s Trident Water. The company allocated up to 285 billion pesos to grow its business in 2022.

“We continue to see an improvement in the business environment with better mobility and ability of both enterprises and consumers to adjust to disruptions,” Fernando Zobel de Ayala, president and CEO of Ayala Corp. said in a statement in March. “With the recent de-escalation of quarantine measures to the lowest status, we are hopeful that 2022 will be the start of our country’s recovery.”

Levin: With Biden’s help, Iran will be able to reach ‘any corner of the earth’ with nuclear capabilities

What Is ‘Lost Ark’ And Why Is It Suddenly The Most Popular Game On Earth?

From Janitor To Making Of The World’s Best Vodka: CEO Of Duvernois Creative Spirits Nicolas Duvernois Shares His Story

Fox News Channel’s ‘The Five’ Is The Most-Watched Show In Cable News With 3.6 Million Viewers

Mosquitoes Can Learn To Avoid Pesticide After A Single Exposure, Study Says