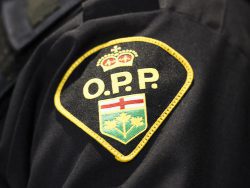 An Ontario Provincial Police logo is seen during a press conference in Barrie, Ont., on April 3, 2019. (The Canadian Press/Nathan Denette)

Ontario police say human remains found in the Grand River in Dunnville, Ont., are that of an unidentified young girl.

Ontario Provincial Police (OPP) said officers were called to the scene on May 17 after human remains were found in the river in Dunnville, a community roughly 55 kilometres southeast of Hamilton.

In an update on May 18, police confirmed that the remains were that of a girl who had been deceased for some time, though the exact time of death is not yet determined.

“The deceased, approximately one to four years of age, had been in the water for a period of time,” reads a media release from the Haldimand County OPP.

“Somebody out there is missing this child. Somebody is wondering what happened to this child and we want to hear from those people.”

The police asked anyone with relevant information to call them as the investigation continues.

“We’re hopeful that members of the public will assist us,” Glassford said. “I think this is one of those cases that we’re really going to depend on the public to help us identify this child and determine what happened, and how this child ended up in the river, and the circumstances surrounding that.”

The Office of the Chief Coroner and Ontario Forensic Pathology Service will conduct a post-mortem on May 19 to look into the cause of death.

Police said they are looking into missing person reports in Canada and the United States to help identify the girl, and that more updates will be provided as the investigation unfolds.

Andrew Chen is an Epoch Times reporter based in Toronto.

How we learned to break down barriers to machine learning

‘Für Elise’: The Mystery of the World’s Most Popular Piano Piece