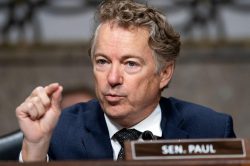 With Russia attacking Ukraine right now, whom did Senator Rand Paul (R-Kentucky) call a “dictator in chief” in his March 14 Opinion piece for FOX News? Well it didn’t seem to be the “Russian dictator, invading a foreign country,” that U.S. President Joe Biden mentioned in his State of the Union Address on March 1. Nope, Paul’s opinion piece was about, surprise, surprise, Anthony Fauci, MD, the Director of the National Institute of Allergy and Infectious Diseases (NIAID).

Yep, as the Covid-19 coronavirus continues to claim over 1,200 lives each day and Russia threatens Ukraine’s sovereignty, it looks like Paul is continuing to focus on one of his fellow humans and Americans: Fauci. Paul’s piece bore the headline: “Covid lockdown lessons learned – Fauci amendment would mean no more health ‘dictator in chief.’” And beneath this headline was the following subhead: “My amendment would eliminate Dr. Fauci’s position as NIAID director, divide his power into 3 separate institutes.” He didn’t specify in the article as to why specifically he chose the number three. But many good things do come in threes such as Stooges, little pigs, French hens, and the members of the musical group Hansen.

Paul’s Senate office also released a press release re-iterating what he wrote in the FOX News piece. In the article, Paul wrote, “We’ve learned a lot over the past two years, but one lesson in particular is that no one person should be deemed ‘dictator in chief.’ No one person should have unilateral authority to make decisions for millions of Americans.” Indeed, many would probably agree that the U.S. shouldn’t have a “dictator in chief.” For example, who would want a President who wasn’t actually elected by the American people? So what was Paul’s solution? Making sure that every American has equal access to voting? Putting in safeguards to prevent an election from being overturned?

Not exactly. The next sentence in Paul’s piece read: “To ensure that ineffective, unscientific lockdowns and mandates are never foisted on the American people ever again, I will introduce an amendment to eliminate Dr. Anthony Fauci’s position as director of the National Institute of Allergy and Infectious Diseases and divide his power into three separate new institutes.” Umm, how exactly could Fauci have been a “dictator in chief” when ultimately it was the U.S. President who has had the final word followed by the Vice-President, Congress, and a number of other Presidential appointees?

Dr. Anthony Fauci, White House Chief Medical Advisor and Director of the NIAID, shows a screen grab … [+] of a campaign website for Sen. Rand Paul (R-KY) while answering his questions at a Senate Health, Education, Labor, and Pensions Committee hearing on Capitol Hill on January 11, 2022 in Washington, D.C. (Photo by Greg Nash-Pool/Getty Images)

Speaking of dictators, throughout history dictators have seized power by first controlling anyone who may offer dissent such as scientists and the media. That’s why it’s usually a good idea to keep people like scientific leaders and the media separate from the control of political leaders. Doing so could prevent a wannabe dictator from having undue influence on what scientists and the media say. Yet, Paul proposed the following: “Each of these three institutes will be led by a director who is appointed by the president and confirmed by the Senate for a five-year term.”

Imagine what might have happened over the past several years had the President had even more control over Fauci’s position. Remember when Fauci pushed back on Trump’s assertion that the pandemic had “rounded the corner” in September 2020? Or how about later that month when Fauci contradicted Trump’s claim that the the severe acute respiratory syndrome coronavirus 2 (SARS-CoV-2) affects “nobody young” during a CNN interview:

Then, there was Fauci dissenting again with Trump the next month after the latter had stated that was only as deadly as the flu, as Corky Siemaszko reported for NBC News. Imagine what could have happened had Trump been able to readily appoint and dismiss someone in Fauci’s position? At times, it seemed like Fauci was the only one appearing at the White House press briefings in 2020 who offered any disagreements with Trump’s statements about the pandemic. So when Paul argued in his piece that “No one person should have the sole authority to dictate science, especially when that one person wasn’t ever following the science,” how exactly would having a non-scientist having even greater control over Fauci’s position prevent this?

Paul’s use of the words “dictator in chief” was interesting, since it’s not even clear how much power Fauci even wielded with the Trump Administration calling the shots. Most of the public health guidance in 2020 came from the Centers for Disease Control and Prevention (CDC), which was being run by Trump appointee Robert Redfield, MD. The U.S. Food and Drug Administration (FDA), which was guided by Trump appointee Stephen Hahn, MD, determined which Covid-19 vaccines and treatments would get authorized and approved. And throughout 2020, Trump brought in people of his choosing such as Scott Atlas, MD, to guide the Covid-19 response and seemed to increasingly sideline Fauci.

In his piece, Paul didn’t really point too many specifics about what Fauci did wrong. Paul did write that “When Dr. Fauci said that cloth masks worked, I was truly concerned because that’s not what the science demonstrated.” While medical grade face masks like N95 respirators are certainly more effective than cloth masks at blocking the SARS-CoV-2, it is not necessarily accurate to say that cloth masks don’t do anything. Scientific studies have suggested that wearing a cloth mask may reduce the amount of virus that an infected spews out into the air. Paul also cited a report from a “group of researchers at Johns Hopkins University.” He didn’t specifically name that report but I covered for Forbes a report that was not peer-reviewed and co-authored by a professor from Johns Hopkins University that made claims that didn’t seem to match the evidence provided. Of note, YouTube did suspend Paul in August 2021 after the ophthalmologist posted a video claiming that most masks “don’t work” against the Covid-19 coronavirus, as Joe Walsh reported for Forbes back then.

Paul concluded his Opinion piece with “The biggest lesson we have learned over the last two years is that no one person should have this much unchecked power. And my amendment, which will get a vote this week, will finally force accountability and fire Dr. Fauci.”

It’s probably safe to say that Paul and Fauci are not BFFs. During a Senate Committee hearing in January of this year, Fauci told Paul,“You keep distorting the truth. It is stunning that you do that,” as covered by Téa Kvetenadze for Forbes and as you can see in this C-SPAN video:

Paul’s continued attacks of Fauci do show the importance of maintaining and even creating more scientific leadership positions that are more independent of the U.S. President and Congress. This would better allow science rather than politics determine public health policy. Keep in mind that Fauci first became the Director of the NIAID under a Republican President, Ronald Reagan. He then continued to serve in that role under two more Presidents (George H.W. Bush and George Bush) interspersed with two Democratic Presidents (Bill Clinton and Barack Obama) before Trump reached the White House. It is important, especially during a public health emergency such as the Covid-19 coronavirus pandemic, to have leaders who follow the science rather than what specifically any political party wants to see. Otherwise, the U.S. could very well end up with a “Dictator-in-Chief.”

Full coverage and live updates on the Coronavirus

This Laughing Kookaburra Chose the ‘Wrong Tree’ to Land In, and Wagtails Didn’t Like It