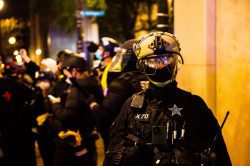 Rioters in Portland, Oregon, were seen smashing windows and committing numerous acts of vandalism downtown on Saturday night and early Sunday in connection to the Supreme Court’s ruling that overturned Roe v. Wade.

The group can be seen in photos and videos scrawling numerous messages on the sides of buildings, targeting the Supreme Court and making pro-abortion comments. Footage also showed the individuals partaking in the riots wearing all black, a color that’s often employed during Antifa riots.

According to a flyer that was obtained by KOIN-TV, they were encouraged to wear “all black,” a term often used during the 2020 riots in Portland that went on for more than 100 days and nights.

In a news release on Sunday morning, the Portland Police Bureau said that “officers were monitoring the crowd, but did not have resources to intervene in the moment.”

“At the time of this event, there was an injury shooting and a stabbing in East Precinct, and a felony assault in Central Precinct,” the release continued. “Additionally, a community festival in North Precinct was underway, an impromptu ‘dance party’ drew approximately 1,000 people to Irving Park, and they held a march and blocked traffic. There were also calls about speed racers doing stunts in various parts of Portland.”

No arrests were made during riots, according to the Portland Police Bureau in a Sunday morning update, but it added that “just because arrests are not made at the scene, when tensions are high, does not mean that people are not being charged with crimes later.”

As the group left the area on Saturday night, officers confirmed that windows were broken at several banks and coffee shops.

“A pregnancy resource center was vandalized,” the police department said. “Officers are working to contact affected business owners and assist with arrangements to secure the buildings. Efforts are already underway to get graffiti removed.”

“Individuals who engage in violent activity or property destruction will be investigated and are subject to arrest and prosecution. That does not always happen in the moment. We will continue to conduct follow-up investigations, make arrests, and forward cases to the Multnomah County District Attorney for prosecution,” said the bureau in its release.

Elsewhere in Oregon, police in Eugene, in the central part of the state, arrested 10 people in connection to riots over Friday’s ruling, according to a news release. Nine people were charged with disorderly conduct, while one person was charged with resisting arrest.

The department said that as a large crowd gathered, some rioters who were wearing all black started throwing rocks, smoke bombs, and other objects at police.

Despite the ruling to overturn Roe v. Wade, access to abortion will be maintained in Oregon. The Supreme Court’s ruling, written by Justice Samuel Alito, argued primarily that states should choose whether they want to pass laws to legalize or criminalize abortions.

Alison Gash, an associate professor of political science at the University of Oregon, told OPB earlier this month that she believes the state’s Supreme Court would likely “argue that their understanding of the state constitutional mandate is that it would protect a person’s right to choose to have an abortion … but that becomes largely unnecessary if the state legislative commitments continue to remain on the books.”

US Will ‘Continue to Provide Seamless Access’ to Abortion in Military: Defense Secretary

A Cool Cup of Joe: Around the World in Iced Coffee

‘A bridge between past and present’: Colourised photos bring refugee stories to life