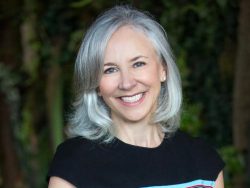 Kindness and authenticity are not words typically used to describe leaders of Fortune 500 companies. Then again, Amy Weaver, chief financial officer of Salesforce, is not your typical leader. She spent most of her career as a lawyer, leading legal teams at Expedia and Univar Solutions before joining Salesforce as General Counsel in 2013. She became chief legal officer in 2020 and CFO in 2021. Here, we speak with Weaver about why she chooses to lead with kindness and how we can leverage the post-Covid world to empower women and other underrepresented groups in technology.

Women leaders are often scrutinized for the way they lead. How do you navigate this scrutiny?

AW: The good news is that there are women to scrutinize. We finally have an incredible number of women who are breaking into the top levels. We need a lot more, but the momentum over the past few years has been really encouraging.

What concerns me, though, is that we’re not making the necessary changes in terms of how we look at leaders– how we think about how a leader acts, what a leader sounds like, how tall a leader is. The perceptions of leadership are still so grounded in a traditional way.

For women to really make advances, we have to show that they are different ways to lead. You’re not encouraging diversity if you invite a wide range of people into the workplace, but then tell them, the only way to advance is to act exactly like everyone else has in the past.

How would you describe your leadership style?

AW: I just pulled out a book that I read when I was starting my career in Hong Kong in the late 1990s. The name of the book is Play Like a Man, Win Like a Woman [by Gail Evans, the first female executive vice president at CNN ], and the subtitle is What Men Know About Success that Women Need to Learn. It sounds incredible now, but at the time, I thought that was what I had to do– conform my behavior [to be like a man].

Three of the chapters that stood out to me were: “Don’t Expect To Make Friends,” “Be an Impostor,” and “Toot Your Own Horn.” There was probably a time and place when these were necessary steps, and I appreciated the advice then. But right now, this approach is not helping companies be stronger, and it’s certainly not helping create a new level of leadership. I do want to be friends with the people I work with. I don’t want to have to toot my own horn, and I certainly don’t want to be an impostor. Trying to get through to that level of authenticity and being able to be confident in what you’re doing is really the critical next step.

What does it mean to be an “authentic” leader?

AW: I spent too much time early in my early career trying to emulate the leadership styles of the men I was working with and, frankly, not doing it very well. It took me a long time to realize that I was never going to be mistaken for “one of the guys” – especially because I was pregnant half the time! I had to figure out my own style and what was going to work for me.

[At one point in my career], I was preparing for what was going to be a really tough meeting and tough negotiation, and a wonderful man, who I consider a friend and a mentor, sat me down to tell me how to run the meeting. He said I needed to march into that room, lay down the law, and not be too nice. I told him I wasn’t going to do that. My response was, when was the last time you sent me into a negotiation or deal and I didn’t get you exactly what you wanted? That stumped him. Everything he had described would have worked for him, but if I had gone marching into that office smacking the table and swearing, everyone would have burst into laughter because it would have been so totally inauthentic— I would have looked and felt ridiculous. By that point, I gained the confidence to know I could go into a negotiation and rely on my own skills, my own ability to connect with people.

When developing your leadership style, you need to ask yourself, is the way I lead 1) making the company stronger? 2) true to who I am?, and 3) necessary to get that job done?

Have you ever experienced “impostor syndrome”?

AW: This is something I think about every day. It is real. You never get over it entirely, but you have to get comfortable with it. Chances are, whatever situation you’re in, you have a room full of people who are probably feeling the same way. That can be a really a real breakthrough.

What does it look like to lead with kindness?

AW: Kindness is a leadership trait we don’t talk about a lot, but it’s important.

After working at Expedia, I joined a company called Univar Solutions in Seattle. I was really excited. They were going to go public, and it’s always been my dream to take a company public. A year later, the CEO had left, they decided not to go public, and they decided to move the company to Illinois. I remember feeling like I had somehow made all the wrong choices. I decided to leave the company. It really was a dark point in my career.

I got a call out of the blue from an outside counsel I worked with who I barely knew. We had lunch, and he said, you don’t know this, but you gave me work two times when I needed it most in my career. My family knows about you. I just want you to know that I’ve set up my own law firm. I have an extra office, and you are welcome to it. I didn’t take him up on it, but it meant so much to me.

Making other people succeed is an incredible opportunity to build loyalty, and it can come back to you in a really powerful way in your life.

It’s been hard to “connect” during Covid, but what role has networking played in your career success?

AW: I believe that the more people you connect with at a company and in your lives, the more opportunities will come your way. Networking can sometimes be a dirty word. You picture a room full of people in power suits handing out business cards. It can sound very self-serving or transactional, but if you think of it as just making connections, opening up your circle to more friends, more people, the opportunities flow to you. You’ve got to be brave enough to take the opportunity.

How did Covid change the way you lead?

AW: Those first few months of the pandemic were intense. I remember being on Zoom calls with women who had small children. They were living in small apartments in San Francisco, the kids were practically crawling over them. You could hear in the other room that their kids were supposed to be in class online, and they clearly needed an adult to supervise them. As leaders, we had provide some sort of relief— and flexibility— to let them know that we understood what was going on.

Of course, we saw the studies of women just dropping out entirely from the workforce. A million women at one point just disappeared from the payrolls.

What we have got to do as we are heading back is to really turn the entire narrative and find out how this can be powerful for women. How can we leverage this new world that we’re entering so this is a strength and a good thing for women, and for diversity. On my team, this has broadened where I can hire people. If you no longer require that people live in very specific cities around the world, there is a wider talent pool to draw from, in the US and abroad. You can tap into a much more diverse set of people when you’re more flexible about where they’re living.

The benefits of having some flexibility in your life, especially when you have a family, whether you’re a man or a woman– occasionally being able to work from home or work different hours– I actually think it could be a breakthrough for women in the workplace if we get this right, and we don’t just snap back to the prior world.

This interview was excerpted from a class, Women in Technology and Innovation, taught by Adjunct Professor Samantha Walravens at Lehigh University. It was edited for clarity and length.

We Cannot Count on the CCP for Honesty: Rep. Wenstrup