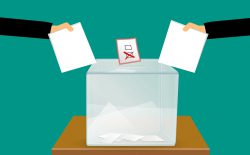 New research from the University of Washington shows that Seattle’s democracy voucher program increased donations and the number of candidates in city elections. Credit: Pixabay

Each odd-year election cycle since 2017, four $25 democracy vouchers have arrived in the mail for registered voters in Seattle.

Each voucher can be donated to a single campaign for city office or dispersed to separate campaigns. According to the Seattle Ethics and Elections Commission, or SEEC, the goals of the democracy voucher program are to increase the number of voters donating to municipal elections and the number of candidates in those elections.

But is it working?

New research from the University of Washington says yes.

“We found a really big effect on donation activity,” said Alan Griffith, UW assistant professor of economics. “Together with that, we found big effects on small donations. There’s a lot more money being given to candidates in Seattle and more money coming from more donors.”

The study, published online May 19, will appear in the Journal of Public Economics.

Researchers analyzed the effect of the voucher program on Seattle city council races during the first two election cycles post-implementation. Then, they compared the outcomes pre- and post-vouchers to the next six largest cities in Washington and the largest cities in California. The California cities had populations much closer to Seattle’s, but different rules for elections and public campaigns.

Per 1,000 people, Seattle’s program increased donations by approximately $31,000, or 53%, per race and increased the number of donors per race by 350%. Candidates received about 270% more dollars through small donations, which are donations of less than $200. The study also revealed an 86% increase in the number of candidates and a large decrease in incumbent electoral success.

“How campaigns learn to interact in a world with democracy vouchers is an interesting question,” Griffith said. “Everybody has $100 to give out and the intention of the program is to shift the fundraising attention and the policy toward those people instead of people who can write big checks.”

In the 2015 Seattle City Council races, before the voucher program, candidates raised more than $400,000 per race from more than 2,000 donors on average. Due to the amount of money required to run campaigns and the relatively small number of donations, concern grew that public policy was dictated by those who had the means to donate.

That same year, city voters passed a ballot initiative that included the democracy vouchers program. When the vouchers are redeemed, the SEEC distributes the value to the campaign.

In 2017, the first year of the program, vouchers were redeemable by candidates in the city council and city attorney races. Mayoral elections were included in 2021. Nearly $1.75 million per cycle was distributed over the first two election cycles post-implementation (2017 and 2019).

“There’s been a lot of talk in Congress about scaling up and building other programs that look like Seattle’s,” Griffith said. “There’s a lot of non-government organizations that are trying to push expansion of this into different cities. People that are pushing this as a way to solve the problem of there being too much money in politics.”

The study found that between 2% and 5% of vouchers are used, meaning there is a substantial amount of money that isn’t being donated. The Seattle campaign differs from other programs in that no large grant is given to fund campaigns. It also allows voters to direct money without having to commit any of their own funds.

“There’s really no other program that gives vouchers,” Griffith said. “Seattle’s program is unique in that you’re given free money to give out. We’re not aware of any other programs that are like this.”

Should You Use Cloud Download or Local Reinstall on Windows?

Young wasps routinely eat their own siblings in the nest

How to set up Find My Watch for your Apple Watch

Just Stop Oil: Protests will be even more disruptive if they kick off panic buying

Solar flares: What are they and how do they affect Earth?