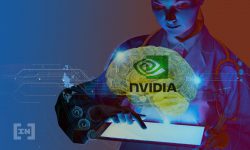 Nvidia Corporation will pay a $5.5M fine following a clampdown by the Securities and Exchange Commission regarding the company’s failure to disclose that its chips were used for mining purposes.

Nvidia Corporation failed to disclose an uptick in sales in 2018 coming from clients using Nvidia’s graphics processing units, or GPUs, to mine crypto. Mining is the process of obtaining new “coins” of a cryptocurrency by solving complex cryptographic puzzles. Initially designed for gaming, GPUs are well-suited for computationally intensive applications like mining, where many guesses of a random number have to be made per second in a race to add a transaction to the blockchain. Nvidia’s GeForce and RTX graphics card lines have been particularly popular with miners. Intel also recently partnered with payments firm Block to supply them with specially designed mining chips as part of Block’s effort to make solar-powered bitcoin mining more transparent.

Nvidia neither denies nor confirms allegations
The SEC alleges that Nvidia did not disclose the increased demand for GPUs by miners, instead choosing to report how digital assets were affecting other business activities.

“All issuers, including those that pursue opportunities involving emerging technology, must ensure that their disclosures are timely, complete, and accurate,” said the outgoing head of the Crypto Assets and Cyber Unit at the SEC, Kristina Littman. Nvidia has declined to comment on the matter, choosing instead to settle without admission or denial of the SEC’s allegations.

Demand for GPUs has declined following the boom in 2017 and 2018. While the boom bodes well for Nvidia’s stock price, gamers found themselves out in the cold as stock levels for GPUs plummeted. Nvidia has sought to address this in 2021 by reducing the number of guesses their hardware can perform in one second (hash rate) on their RTX line. Nvidia claims it has halved the Ethereum hash rate for new RTX 3080 and RTX 3070 graphics cards to prevent mining sales. This opened up the supply for Nvidia’s core gaming market.

Still geared towards casual miners
Nvidia’s Crypto Mining Processor took over the job of mining crypto last year. The 30HX CMP is the budget model, with a hash rate of 26 Mega hashes/ second, while the 40HX is capable of 36 MH/s. The 50 HX model can do 45 MH/s. The flagship model is the HX90, with an Ethereum hash rate of 86 MH/s.

The company will report its earnings on May 25, 2022, where numbers will indicate whether the crypto gambit has paid off, after last year’s first-quarter crypto earnings of over $300M, and predicted second-quarter sales of over $400M.

What do you think about this subject? Write to us and tell us!

Ethereum or Solana: Which is a Better Option For NFTs?

Gold Miners Outshine Bitcoin Miners To Start 2022. Will It Last?