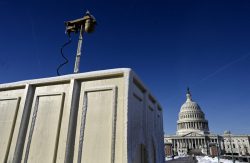 In a Feb. 17 letter to House Speaker Nancy Pelosi (D-Calif.), Davis called for the release of all security video footage from the lead-up to the Jan. 6 breach of the Capitol building.

“For over a year, Democrats in the House of Representatives have sought to exploit the violence of Jan. 6, 2021, for partisan political purposes. Democrats have gone as far as to publicly accuse their Republican colleagues of organizing so-called ‘reconnaissance’ tours of the Capitol Complex in advance of January 6. These claims are baseless,” Davis wrote in the letter obtained by The Epoch Times.

“We have reviewed the security footage for the relevant period, and it does not support these wild accusations. We demand that you release this footage immediately so that the American people can see the truth and judge for themselves why Democrats are so willing to mislead about the events of January 6.”

Davis cited multiple examples of what he described as “repeated attempts by House Democrats to spread misinformation” about the alleged role of some GOP lawmakers in the days immediately prior to the violence that rocked the Capitol Complex.

In addition to clamping down on Capitol access by erecting a fence around its perimeter and manning it with members of the National Guard for months after the attack, Pelosi created the House Select Committee to Investigate the January 6th Attack on the United States Capitol, chaired by Rep. Bennie Thompson (D-Miss.)

The committee was never constituted as provided by the House Resolution that created it, because Pelosi rejected two of House Minority Leader Kevin McCarthy’s (R-Calif.) selections.

As a result, the panel has five Democrats, and two Republicans who were handpicked by Pelosi: Reps. Liz Cheney (R-Wyo.) and Adam Kinzinger (R-Ill.) Both Cheney and Kinzinger voted to impeach former President Donald Trump and have repeatedly accused him of fomenting the Jan. 6 riot in an attempt to prevent the congressional certification of the 2020 presidential election results.

In the year since its creation, the select panel has subpoenaed dozens of former members of Trump’s White House staff and campaign committee, as well as election attorneys and private citizens who supported his 2020 reelection effort.

The panel has held only one public hearing, but according to Davis, it has fueled multiple false news stories in the mainstream media about the alleged role of House Republicans in the violence at the Capitol.

In one of the instances noted by Davis, House Intelligence Committee Chairman Adam Schiff (D-Calif.) was confirmed by a spokesman for the select panel as having altered text messages between Rep. Jim Jordan (R-Ohio) and then-White House chief of staff Mark Meadows. The spokesman apologized for Schiff’s action, which was described as inadvertent.

Rep. Mikie Sherrill (D-N.J.) told then-Acting House Sergeant-at-Arms Timothy Blodgett that she planned to hold accountable “those Members of Congress who had groups coming through the Capitol that I saw on January 5th for reconnaissance for the next day—those Members of Congress who incited the violent crowd, those Members that attempted to help our president undermine our democracy.”
Rep. Sean Maloney (D-N.Y.), the chairman of the Democratic Congressional Campaign Committee, claimed he could confirm Sherrill’s allegation, telling MSNBC that “we find ourselves at a place where the enemy is within, and we cannot trust our own colleagues.”
Rep. Steve Cohen (D-Tenn.) told CNN that he saw “Congresswoman [Lauren] Boebert [R-Colo.] taking a group of people for a tour sometime after the 3rd and before the 6th. I don’t remember the day; we were walking in a tunnel and we saw her and commented who she was, and she had a large group with her.”

Cohen admitted he didn’t know with certainty that the people with Boebert were involved in the Jan. 6 events, but he insisted that “it is pretty clear that her team is the team—she’s not on the home team. She was with the visitors.”

Rep. Jason Crow (D-Colo.) “led a group of over 100 Democrats in calling for an investigation, in part, into the role of members in the January 6 violence. In an interview with The New York Times, Crow specifically accused his colleagues of being ‘complicit’ in the January 6 violence,” Davis told Pelosi.
Thompson, the select panel chairman, told The Washington Post, “We have information that before the actual certification, people came earlier, were giving tours in the Capitol.”

Spokesmen for Pelosi and Thompson couldn’t be reached for comment.

Congressional Correspondent for The Epoch Times.

From CNN Plus to OAN, why some media outlets are struggling