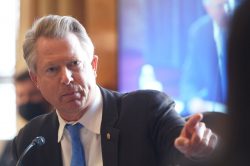 The U.S. Senate on March 2 approved a resolution that would block enforcement of the COVID-19 vaccine mandate for health care workers across the country.

The chamber voted 49–45 to approve the resolution, which was co-sponsored by many Republicans. No Democrats voted for the measure; all GOP members who voted did.

Under the direction of President Joe Biden, federal health officials in 2021 imposed a vaccine mandate for health care workers employed at any facility that receives funding from Medicare or Medicaid. The mandate survived a legal challenge, with the Supreme Court ruling in January that it was within the powers granted by Congress.

Critics say the justification for the mandate—keeping workers from getting COVID-19—has been undermined by the waning effectiveness of the vaccines, particularly after the emergence of the Omicron virus variant.

“Make no mistake, this federal vaccine mandate is not about public health or science—it’s about Joe Biden fulfilling his desire to control every aspect of our lives, and it’s a slap in the face to the hard-working men and women who never took a day off on the frontline fight against COVID-19,” Sen. Roger Marshall (R-Kan.), a doctor, said in a statement after the vote.

Marshall, one of the lead sponsors, said the passage of the resolution was “a huge victory for all the health care workers who ran to the sound of the COVID battle.”

On the Senate floor before the vote, Sen. Mike Lee (R-Utah), who also voted for the measure, said the fight against vaccine mandates “will not stop until freedom is restored.”

“We will not stop until American moms and dads can provide for their families without kowtowing to President Biden’s vaccine mandates, and without submitting to presidential medical orthodoxy in this or any future administration,” he said.

Sen. John Cornyn (R-Texas), another “yes” vote,” said in a statement that nothing in the U.S. Constitution “empowers the President to order particularly private employers to do anything.”

“I encourage everybody to get vaccinated, I have been and will continue to encourage my constituents and friends and family to do so,” he said. “But that’s their choice, not mine, and not President Biden’s.”

Opponents of the measure argued that the mandate helps protect those cared for by nurses and other workers, including the elderly—one of the groups most vulnerable to COVID-19, the disease caused by the CCP (Chinese Communist Party) virus.

“My colleagues say every person is unique and there needs to be flexibility when it comes to vaccines. Colleagues, I’m just fine with that. The fact is, the administration is allowing for medical and religious exemptions. Flexibility is written into the rule because that’s just plain, old common sense,” Sen. Ron Wyden (D-Ore.), who voted against the resolution, said on the floor, adding that “vaccine requirements aren’t anything new for health care workers.”

The measure now heads to the House of Representatives. The lower chamber is controlled by Democrats, who as a whole have been supportive of harsh measures like mandates during the COVID-19 pandemic.

A spokeswoman for House Speaker Nancy Pelosi (D-Calif.) did not respond to a request for comment.

Zachary Stieber covers U.S. and world news. He is based in Maryland.

‘Dancing With the Stars’ Alum Arrested in Ukraine, Flees Country

Twitter Buoyed by Elon Musk’s Acquisition Plans: Here’s What Lies Ahead for the Stock