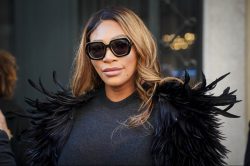 Serena Williams isn’t staying silence in the face of an oversight by The New York Times.

The paper, which printed an article about Williams raising a whopping $111 million for her new venture fund (which is focused on “early stage” companies and is aptly named Serena Ventures) made several questionable decisions in its print publication of the story on top of one major error.

For starters, the 23-time Grand Slam champion was not named by her name in the article title but instead dubbed ‘Tennis Star.’

That oversight might just raise a few brows, but combined with the articles small-sized display towards the side and bottom of the page, it made Williams feel not-so-great.

But perhaps the worst of all was that the NYT chose to include a photo of Williams yet actually printed a photo of her twin sister, seven-time Grand Slam champion Venus Williams.

Serena Williams took to Twitter to voice her frustrations in a short but powerful statement.

“No matter how far we come, we get reminded that it’s not enough. This is why I raised $111M for @serenaventures. To support the founders who are overlooked by engrained systems woefully unaware of their biases,” Williams penned on social media. “Because even I am overlooked. You can do better, @nytimes.”

Williams’ response has garnered over 16,600 likes on Twitter and over 4,100 retweets including quoted retweets.

Many fans rallied behind the athlete in support, calling the error “disgraceful” and “shameful.”

This is absolutely ridiculous! And then they used Venus’ picture. The utter laziness and carelessness is astounding @nytimes. https://t.co/2IvvEbPbQN

— Luvvie is the #ProfessionalTroublemaker (@Luvvie) March 2, 2022Using a photo of Venus for an article about @serenawilliams and her new project @SerenaVentures is something I would not expect from my child’s high school newspaper. Do better @nytimes https://t.co/wfcoD1BIrj

— Suzanne John Lewis Voting Rights (@kilonova_gold) March 2, 2022So many things wrong with this! First why wouldn’t you name check Serena Williams, the biggest tennis star EVER, in the headline? Why is she just a generic “tennis star?” And most egregiously why would you include a picture of HER SISTER not her and label Venus as Serena?! https://t.co/WzAoZo0erD pic.twitter.com/2sNpLw1mp4

— Michelle_BYoung (@michelle_byoung) March 2, 2022This is outrageous…..after all these years, u still can’t get a picture of Serena and NOT Venus right! Wow https://t.co/mzXWkTdvVw

— Rennae Stubbs OLY (@rennaestubbs) March 2, 2022Not the @nytimes using a picture of Venus and not Serena!! Are you kidding me ? https://t.co/3YQ7gQVBw7

— Jackie (Decembly) Penn (@JackiePenn18) March 2, 2022Hey @nytimes that “tennis star” has a very recognizable name, try using it.
Also, there are countless available photos of her and yet you used one of her sister.
Fix it. And do better. https://t.co/dyqkDY3Obv

— Rebel Scum (@AprilTara) March 2, 2022First of all, to use Venus’ picture as if you DONT KNOW what Serena looks like is unacceptable, but to insult her further by relegating her to simply “tennis star” is INSANE. Very inexcusable IMO. https://t.co/pPVywifr04

— Michelle Jackson (@MichLovesMoney) March 2, 2022This is a systemic failure at every level of the New York Times.

— Mike Rundle (@flyosity) March 2, 2022The NYT shortly thereafter tweeted out a statement directly in response to Williams regarding the error in print.

Related: Serena Williams Keeps Showing Us How to Rise Above the Noise

“This was our mistake. It was due to an error when selecting photos for the print edition, and it did not appear online,” the Tweet read. “A correction will appear in tomorrow’s paper.”

This was our mistake. It was due to an error when selecting photos for the print edition, and it did not appear online. A correction will appear in tomorrow’s paper.

— NYT Business (@nytimesbusiness) March 2, 2022However, many still weren’t having it, with many calling out the fact that the paper’s response was “not an apology.”

“I was a photo editor for years. No way I would make this mistake because our editorial department was rigorous,” Lisa Thais Tweeted in response. “You make these mistakes on an almost daily basis. And it shows.”

Serena Ventures is a VC firm that currently has over 60 investments in its portfolio, including Propel, Cointracker and Masterclass.

“The venture capital ecosystem needs an inclusive player with the platform necessary to enact change at scale, and this fund gives us an opportunity to take our mission to the next level,” the company said in a statement. “The best is yet to come.”

‘Glory to the heroes’: In Kherson, civilians brandish Ukrainian flag in the face of Russian troops

After 84 Years, the World’s Happiest Employee Just Shared 3 Easy Rules to Learn to Love Your Work

An Open Letter To A Bitcoin-Doubting Friend On Wall Street

Bitcoin, Ethereum, BNB, XRP, Solana Price Down, Should You Buy the Dip?

Shibarium testnet draws closer; Can it propel SHIB to a new ATH?

Stripe to Offer Crypto Payments With Twitter First to Trial