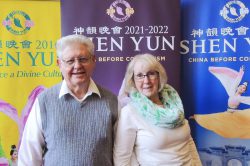 For retired music teacher Doreen Thorusen, this was certainly the case. Doreen, together with her husband James, a retired broadcast engineer for CBS Television, had come to see Shen Yun at the Keller Auditorium, Portland, Oregon. Doreen plays in the Salem Philharmonic Orchestra and teaches violin privately.

“The orchestra was perfect! They were really, really, good and I liked the blending of the Western instruments along with the Asian instruments. It was a very, very nice touch,” she said.

“She was awesome! And when [the musician] got the really fast part, when she was moving along, that was impressive,” she said.

The couple was so impressed that they bought copies of the Shen Yun music. “So, I can take them home and get my violin out and play some chords,” said Doreen laughing.

“I really got my comeuppance. I had my mind opened a little bit. Or if it’s not opened it’s cracked,” he said as they both laughed.

The company’s aim is to bring back the true traditional Chinese culture as it was in the pre-communist era. But its repertoire also includes more recent events.

James was particularly touched by the dance that portrayed the Chinese communist regime’s persecution of Falun Dafa, an ancient spiritual practice derived from the schools of Buddha and Tao.

“I think an awful lot of people in Portland needed to hear [it] and probably a lot of them didn’t want to hear it,” he said, referring to the atrocities committed by the Communist Party.

“My feeling on it is that the Chinese government [is] extremely corrupt … Life is a gift from God and for [the Chinese communist regime] to take those people and kill them and harvest their organs and send [the organs] off to other countries, it’s wrong—it’s wicked,” Doreen said.

A musical piece sung by Shen Yun’s vocalist, resonated with the couple. The lyrics address the concepts of atheism, evolution, and the loss of moral values.

The idea that atheism and evolution lead to an abyss, is very true, James said.

“It may [that] we have a different spiritual approach, but the truth of that statement is undeniable,” he said.

The Epoch Times is a proud sponsor of Shen Yun Performing Arts. We have covered audience reactions since Shen Yun’s inception in 2006.

[Premiering 3/19 at 7:30PM ET] Laura Dodsworth: How Government Exploited Fear and Human Psychology During the Pandemic

5 Amazing Tips on Turning Real Estate Into a Real Fortune

Thirty years on, remembering the Furiani stadium disaster in Corsica

Australia Working With Partners on ‘Deep and Serious’ Sanctions on Russia: Foreign Minister