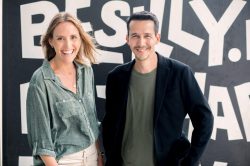 With the raise of its second fund, At.inc/ adds Roni Bonjack as its second general partner. For founder Nadav Eylath, who says he’d been operating like a solo investor, the hire turns At.inc/ into a proper, institutionalized firm.

When Netlify founders Christian Bach and Matt Biilmann approached venture capitalists in 2015 with an idea to solve a pain point of Web development, few investors could see the problem. Separating the front end from the back end, the founders believed, would make developers’ jobs much easier. But they had little business traction to show. “It was pitching a business to solve a need that we predict will be there, but it’s not there currently,” Bach says.

One investor who did see the potential right away: rookie venture capitalist Nadav Eylath, founder of a fund called At.inc/ (styled with a slash, like a website URL). Investing out of a $12 million vehicle, Eylath wrote Bach and Biilmann a $775,000 check, his first-ever lead investment. Today, with Netlify worth $2 billion, Eylath has already made a 100x return, a big reason his first fund now carries value at a 10x multiple to its invested capital.

“We’re not waiting to see traction. We just want to connect to the founders and their vision on what can change in the world,” Eylath says. “If it’s too early, it’s probably a fit for us.”

Now, to keep making risky day-one bets like Netlify, Eylath has closed a second $35 million fund for At.inc/. Joining the firm as a general partner in the new fund is Roni Bonjack, a Facebook and Google veteran. The pair, who have been friends since attending high school together, will make their investments from opposite ends of the world: Eylath from Silicon Valley, Bonjack from their native Israel.

At.inc/ is aptly named as shorthand for “at incorporation,” indicative of the firm’s mission of partner with founders from the very start. The fund is generalist, both in terms of the industries and the geographies in which it makes investments. The crux of the strategy, Eylath says, will be to deploy the capital slowly, over as many as five years, in $1 million to $3 million checks for seed rounds that it leads or coleads. But to prove the firm’s worth as a lead seed investor in a crowded early-stage fundraising environment, the partners plan to get involved much earlier than that, like writing smaller checks of $100,000 or providing assistance on spec to a fledgling company.

That’s what Eylath did with business management software maker Honeybook, started by three Israeli entrepreneurs who had gone to high school with Eylath’s wife. After Eylath convinced cofounder and CEO Oz Alon to move to Silicon Valley from Israel, the two met up for a weekly beer, with Eylath imparting lessons learned from his time as an early-stage startup employee. “This natural once-a-week beer just became a formal advisory role—working with them hands-on with a lot of different things—and that turned into a personal check, and then a check from the first fund,” Eylath says.

Honeybook’s Alon and Netlify’s Bach also credit Eylath for his conviction in making decisions that appear contrarian. Where other prospective investors encouraged Netlify to target big customers from the start, Bach says Eylath stood out for his belief in first focusing on the community of developers. “What mattered for us was how many developers we are in the tool belts of—not what are the logos of enterprise customers,” Bach says. The strategy paid off: One year later, traction had soared and Netlify no longer struggled to find a receptive VC. “We got six term sheets in two days from everyone big whom you would expect in Silicon Valley,” says Bach, who chose Andreessen Horowitz to lead the Series A round.

At the onset of the Covid-19 pandemic in early 2020, business dipped at Honeybook, which primarily sells to small businesses. “We were running out of cash and our revenues dropped,” Alon says. “I wasn’t sure that we’d be able to dig ourselves out of this.” Convinced that the company foundation was strong and that the numbers were not as disastrous as they seemed, Eylath picked up the load of more hesitant investors, and increased his stake in the startup by writing a new check 18 times the size of his pro rata rights in an internal funding round. Honeybook rebounded the following year and is now valued at $2.5 billion.

Bonjack’s addition to the team adds a layer of programmatic experience on top of Eylath’s boutique approach. In four years at Facebook’s Tel Aviv office before she joined At.inc/, Bonjack led the Europe, Middle East and Africa team in launching region-specific programs, including a series of startup accelerators in locations such as Germany and Nigeria. At Google, she similarly scaled the accelerator program into a global operation.

In addition to investing in the United States and Israel, where the two partners are based, the new fund will allow At.inc/ to explore more “unsexy and overlooked” markets that could grow into a burgeoning tech hub like Tel Aviv has become, Bonjack says. Scotland and Stockholm are among the locations she is tracking in hopes of planting an early flag in the same way the firm makes early bets on companies. “The most important thing is to be a partner as early as day one,” she says. “There is nothing that is too early for us.”

Pfizer Will Donate All Russian Profits To Ukrainian Relief Efforts

Microsoft Is Suspending All New Product Sales In Russia, Which Includes Xbox